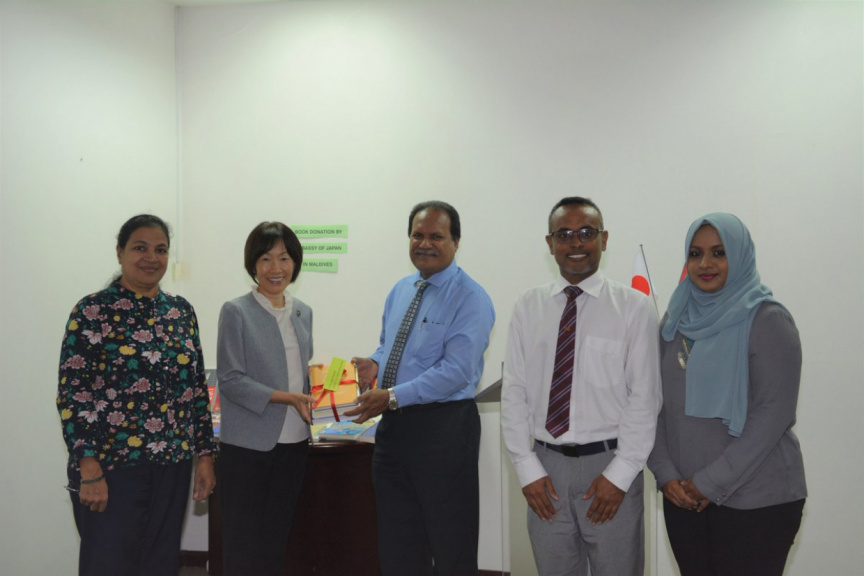 The Nippon Foundation of Japan has donated books to the Civil Service Training Institute (CSTI) of Civil Service Commission of Maldives as part of its Read Japan initiative.

The books were donated on behalf of the Nippon Foundation by the Japanese Ambassador to Maldives, Keiko Yanai in a function held at the CSTI last Monday afternoon.

According to a spokesperson from CSC, the Read Japan initiative is an initiative launched by the Nippon Foundation to promote a deeper understanding of contemporary Japan.

At Monday’s ceremony, Japanese Ambassador Keiko Yanai said she hoped the donation will give Maldivian civil servants a huge boost in gaining a better understanding of Japan – specifically its politics, economy, society, history and culture.

She also reiterated her commitment to strengthening the bilateral relations between Maldives and Japan, and boost the collaboration between the civil services of the two countries.

Meanwhile, the President of CSC, Dr. Ali Shameem expressed his gratitude to the Japanese government for its continued assistance to Maldives.

He also expressed hopes of a MoU between CSC and the National Personnel Authority of Japan to build long-term profitable and practical working connections in areas of mutual interest between the two insitutions.

During discussions held after the function, Ambassador Keiko Yanai and Dr. Ali Shameem discussed different areas of mutual interest that the Japanese Embassy could assist the CSC.

During the discussions held after the ceremony, Ambassador Yanai and Dr. Aly Shameem conversed on the different areas of shared interest that the Embassy could assist Civil Service Commission.