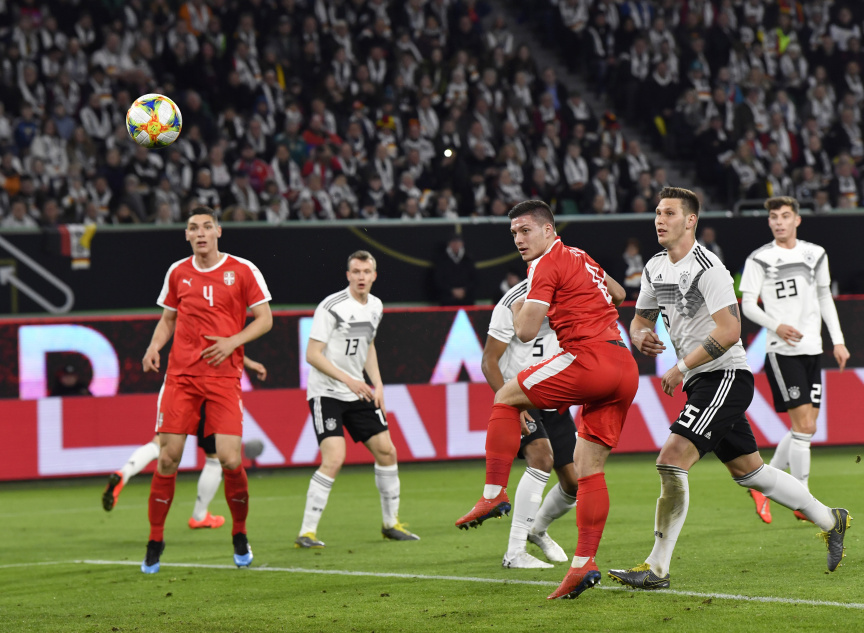 A second-half equalizer from Leon Goretzka was needed for Germany to salvage a 1-1 friendly draw against Serbia on Wednesday, four days before starting its European Championship qualifying campaign away to an old foe, the Netherlands.

That's a tough test since the Netherlands drew 2-2 with Germany in the teams' last competitive fixture and beat Germany 3-0 in October. The Germans won just one of seven competitive fixtures in 2018 as they failed to advance from their World Cup group as defending champions and were relegated to the second tier of the Nations League.

Coach Joachim Loew tried to shake up the squad against Serbia, but ended up relying on older faces after a poor first half.

Luka Jovic gave Serbia the lead in the 12th minute as one of Loew's new players, debutant defender Lukas Klostermann, botched a clearance and sent the ball straight to the Serbian striker.

It was the first international goal for Jovic, who has scored 22 goals for Frankfurt this season, and an encouraging sign for Serbia ahead of its opening qualifier away to Portugal on Monday. Serbia could have scored again but Adam Ljajic fired over the bar to waste a good team move.

Timo Werner, Leroy Sane and Ilkay Gundogan missed a string of good opportunities for Germany before Goretzka made it 1-1 in the 69th from the edge of the area after a pass from fellow substitute Marco Reus.

Of three uncapped players in the squad, only Klostermann made his debut. With Germany struggling again, Loew opted to leave Werder Bremen's Maximilian Eggestein and Hertha Berlin's Niklas Stark, both midfielders, on the bench.

Klostermann appeared to injure his groin late on, while Serbian substitute Milan Pavkov was sent off in stoppage time for sinking his studs into Sane's leg.