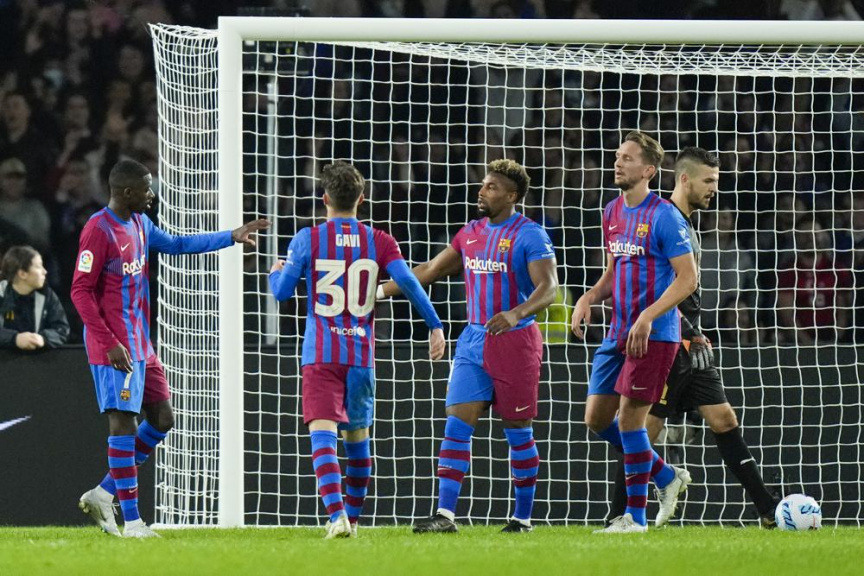 Barcelona's Ousmane Dembele, left, is congratulated by teammates after scoring his team's first goal against the A-League All Stars' during their friendly soccer match at Stadium Australia in Sydney, Australia, Wednesday, May 25, 2022. (AP Photo/Rick Rycroft)

SYDNEY (AP) — Barcelona’s first-ever match in Australia ended in a 3-2 victory over an A-League All-Star team on Wednesday with substitute Ansu Fati scoring the winning goal.

Before 70,174 spectators at the Olympic Stadium, Barcelona led 1-0 at halftime after Ousmane Dembele scored in the bottom right corner in the 34th minute.

Rene Piscopo leveled for the All-Stars in the 47th minute and the home side took the lead when Adama Traore scored in the 53rd. But his opposing namesake — Adama Traore — leveled for Barcelona in the 72nd minute before Fati’s winner five minutes later.

“I think, tactically, they (the All Stars) were very good,” Barcelona coach Xavi said. “They created chances in transition and we suffered a lot. It was a big surprise for us because I don’t follow the A-League a lot.”

The list of absent Barcelona players was a long one. The team was without injured Gerard Pique, Pedri, Sergio Roberto, Eric Garcia and Sergiño Dest, who have all stayed behind. Barcelona was also without Riqui Puig and Oscar Mingueza because of international duty, and Ferran Torres didn’t make trip because of his vaccination status.

The Spaniards were also without Martin Braithwaite, who has international duties with Denmark, while Neto and Clement Lenglet were out because of family reasons.

Former Manchester United striker Dwight Yorke made his full-time coaching debut in the match when he led the All-Stars. Next season he will begin a two-year contract to coach the A-League’s Macarthur FC.

“I’m sure that everybody has probably left here pretty pleased,” Yorke said. “Maybe, from our point of view, we’re disappointed with the fact we didn’t win the game.

“Overall, I think it was a terrific performance from the players. They deserve all the credit and praise they are likely to get.”

Flying museum to honor Maradona ahead of World Cup