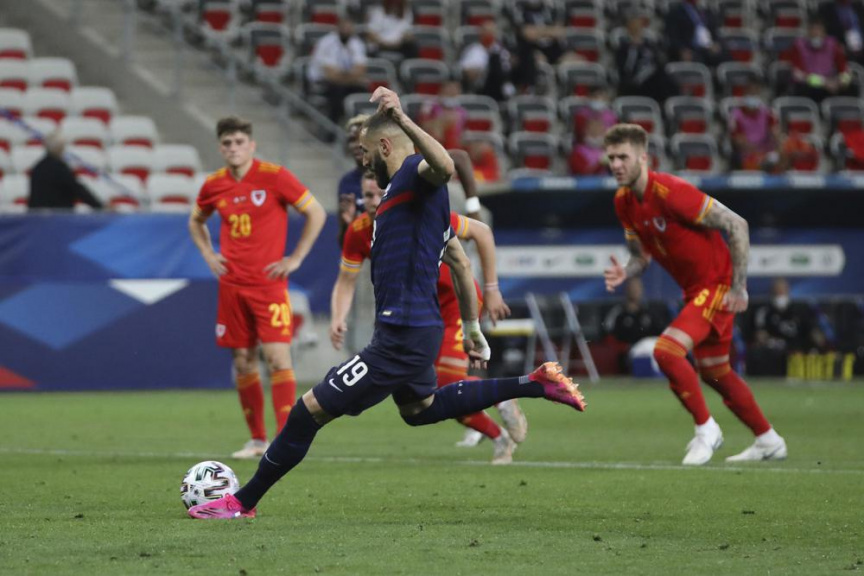 Benzema, back in France’s team after a 5½-year absence, had a penalty saved and also hit the post in a 3-0 win over Wales in a warmup match ahead of the European Championship.

At least he came through the game unscathed, unlike Alexander-Arnold.

The Liverpool right back, who was selected by England for Euro 2020 after being dropped for international matches in March, sustained a thigh injury late in a 1-0 win over Austria and had to be helped back to the locker room.

“It’s not good to see him come off the way he did,” England coach Gareth Southgate said of Alexander-Arnold, one of four right backs in the 26-man squad.

Hummels and Müller made their returns for Germany 2½ years after their last national-team appearances but had to settle for a 1-1 draw with Denmark in another match between sides who qualified for the Euros.

The Netherlands scored an 89th-minute equalizer through Memphis Depay to draw 2-2 with Scotland in another warmup.

France coach Didier Deschamps ended his long feud with Benzema, which came amid a sex tape scandal involving the striker, by calling him up for the first time since October 2015 and immediately put in the starting lineup alongside Kylian Mbappe, with Antoine Griezmann playing just behind them in a 4-4-2 diamond formation.

Mbappe and Griezmann both scored in the first half for the world champions, after Wales had been reduced to 10 men when Neco Williams was sent off for a goal-saving handball to set up the penalty that Benzema missed in the 27th.

Ousmane Dembele added a third with a 79th-minute effort which came after Benzema struck the post with a shot on the swivel.

England and Austria players took a knee before their warmup match and it was met with a mixture of loud boos and applause.

It was the first time an England side has made the anti-racism gesture in front of a home crowd.

“I did hear it,” Southgate said of the jeers. “It’s not something on behalf of our Black players that I wanted to hear because it feels as though it’s a criticism of them.

“I think we have got a situation where some people think it’s a political stand that they don’t agree with. That’s not the reason we are doing it. We are supporting each other.”

Bukayo Saka scored his first international goal to earn the win for England.

Jordan Henderson, picked by England for Euro 2020 despite having not played since February because of a groin injury, didn’t feature because he felt some discomfort early Wednesday

Germany coach Joachim Low felt the returns of the experienced Müller and Hummels, who both played the full game against Denmark, improved the communication in the team.

“Of course, maybe a game or two to refine the connection a bit,” Low said. “We haven’t been here for a while and haven’t always played with some of the others like that.

“What was better was communication, talking to each other. It was louder on the pitch. The commands were better, it wasn’t as quiet as it was before.”

Florian Neuhaus’ 48th-minute opener for Germany was canceled out by Yussuf Poulsen, who plays in the Bundesliga for Leipzig, in the 71st.