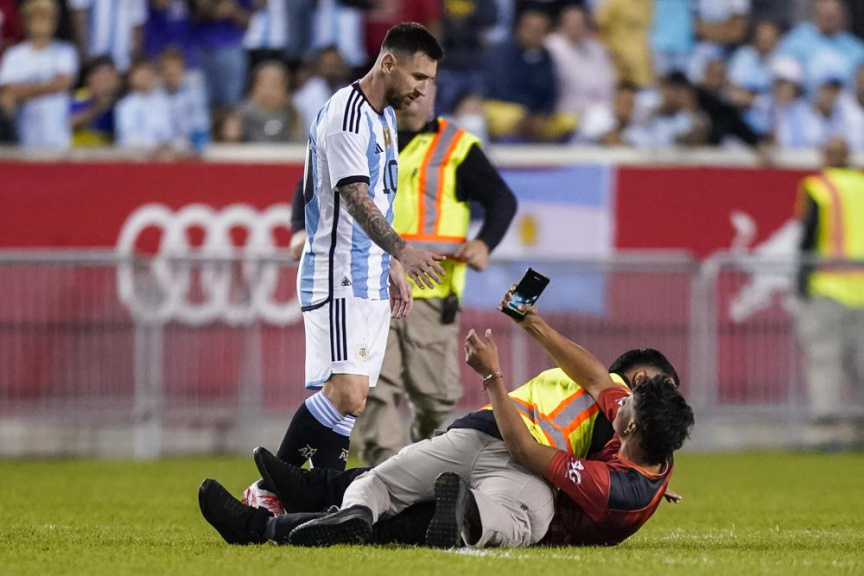 A fan is tackled as he tries to take a picture of Argentina's player Lionel Messi during the second half of an international friendly soccer match against Jamaica on Tuesday, Sept. 27, 2022, in Harrison, N.J. (AP Photo/Eduardo Munoz Alvarez)

HARRISON, N.J. (AP) — Lionel Messi responded to an in-game, on-field request for a signature with a signature goal.

Messi scored two goals and was twice accosted by fans running on the field as Argentina extended its unbeaten streak to 35 matches over three years by beating Jamaica 3-0 on Tuesday night in its next-to-last World Cup warmup match.

“You have to enjoy Messi,” Argentina coach Lionel Scaloni said. “No matter your country, everyone does. I’m his coach, but I would buy a ticket to see him.”

Julián Álvarez put Argentina ahead in the 13th minute. Messi entered in the 56th and increased his career total to 90 goals in 164 international appearances with his 17th multigoal game.

“There are no words to describe what he is,” Álvarez said. “Playing five, 10 minutes or all the match, he manages to do amazing things.”

A fan sprinted onto the field in the 65th minute and tried to take Messi’s photo. Messi stood and watched the spectator being subdued at his feet while the fan still tried to snap an image with his cell phone.

The six-time world player of the year, three months past his 35th birthday, doubled the lead when he beat Andrew Blake to the goalkeeper’s left on a 23-yard left-foot shot in the 86th minute after driving forward following a give-and-go with Giovani Lo Celso.

After his first goal, Messi was approached by a barechested fan who asked him to sign his back, and he appeared about to scrawl a signature before three guards tackled the fan and more swarmed in.

Messi got another goal three minutes later after he was pulled down by Adrian Mariappa just outside the penalty area. Messi sent the kick through the defensive wall and just to the right arm of a sprawling Blake for his ninth free-kick goal for Argentina.

Fans erupted in applause less than a minute into the second half when Messi walked with teammates to a corner and started to warm up. A large percentage of the crowd appeared more focused on Messi stretching than they did the action on the field, and fans stood and made the stadium rumble when he entered for Lautaro Martínez and took the captain’s armband from Angel Di Maria.

Messi, who won his first senior title for Argentina at last year’s Copa América, still has more speed and quicker acceleration than most and his addition energized Argentina in the second half. He also forced Blake to make a pair of diving saves.

Many in the sellout crowd of 25,000 in Red Bull Arena wore blue-and-white-striped Albiceleste jerseys, making it feel like an Argentina home game. Public address announcements were primarily in Spanish and ribbon boards flashed “Vamos Argentina!”

Álvarez put Argentina ahead after Nicolás Tagliafico passed from the flank to Martínez, who spun around Leon Bailey to open space and centered to the 22-year-old Álvarez. He slotted past Blake for his second goal in 11 international appearances.

Heading to its 13th straight World Cup, Argentina seeks to add to championships it won in 1978 with Mario Kempes and 1986 with Diego Maradona. Argentina has one remaining friendly, against the United Arab Emirates on Nov. 16 at Abu Dhabi, United Arab Emirates. At the World Cup in Qatar, Argentina opens against Saudi Arabia, which tied the United States 0-0 in an exhibition Tuesday, and then plays Mexico and Poland.

The Reggae Boyz, who finished sixth among eight nations in the final round of the North and Central American and Caribbean region, played in jerseys without names, in contrast to Argentina. Jamaica started a first-choice lineup in its first match under new coach Heimir Hallgrímsson that included Premier Leaguers Michail Antonio, Leon Bailey and Bobby Decordova-Reid and Blake, a Philadelphia Union standout.