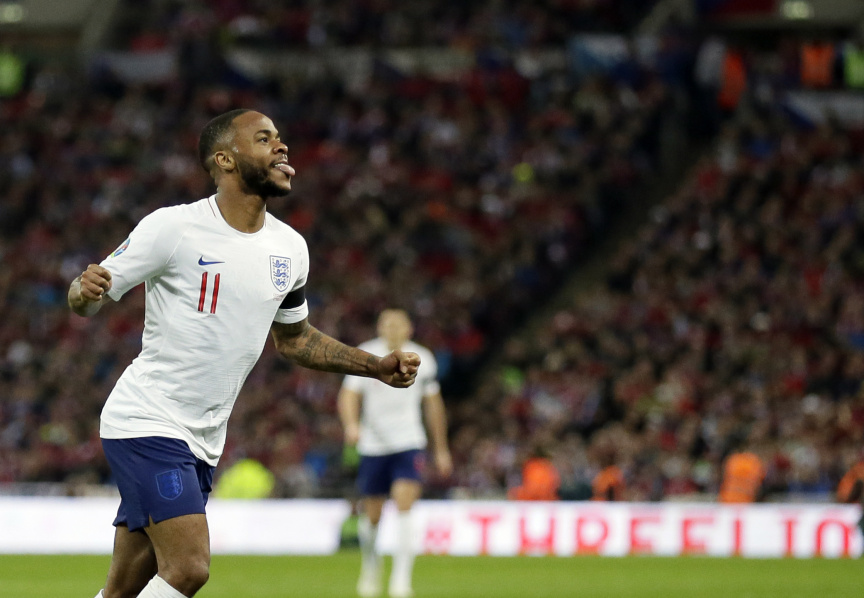 After swiveling with the ball and curling his second goal against the Czech Republic on Friday, Sterling had the memory of a young footballer to honor at Wembley Stadium.

A T-shirt was unveiled under his white Three Lions jersey paying tribute to 13-year-old Damary Dawkins, a Crystal Palace youth team player who died on Sunday after a four-year fight against lymphoblastic leukemia.

"May your soul rest in peace," read a message beneath a photo of Danary. Sterling had appealed last year for potential blood stem cell donors to come forward to save the boy.

"It didn't match and he sadly passed away," Sterling said after England's 5-0 win. "I thought I had to do something to try to give his family something to smile about."

But it could lead to a rebuke for Sterling from UEFA because any messages on undergarments are banned after a change to the laws of the game proposed by the English Football Association five years ago.

Not that Sterling will care about any warning or fine for the moment of compassion in England's opening European Championship qualifier.

For Sterling, the abuse he once received from some of his own fans seems a distant memory now the winger has developed to become a key component in the England revolution under Gareth Southgate.

"I'm so delighted for him to get the reaction he got from the crowd," the England coach said, "because we can't hide from the fact he's had difficult moments. He's turned that full circle ... and I thought he was devastating tonight."

This was an unusual start to qualifying for the World Cup semifinalists, beginning the road to the Euro 2020 final at Wembley at its national stadium since no host advances automatically this time.

In the first pan-continental European Championship, 12 stadiums in 12 European countries are hosting games. Wembley has the biggest role, with seven games, including the semifinals and final.

The ease of the victory over the Czech Republic — Group A's highest-ranked side at 44 after No. 5 England — suggests the path to the finals shouldn't be hard to negotiate.

Even though the creative spark was missing for the first 24 minutes, England came to life when the front three combined to complete a 25-pass sequence with a goal. Jadon Sancho collected a pass from Harry Kane before squaring the ball for the unmarked Sterling to slide in to net the opener.

"I'm just being confident with myself," Sterling said. "Being there and trying to get in areas and trying to take shots and not worry about anything, just go with it."

When Sterling was bundled over by defenders Pavel Kaderabek and Tomas Kalas in first-half stoppage time, a penalty was awarded that Kane converted.

Sterling's second — which was followed by the T-shirt tribute — came in the 62nd minute after he connected with a through ball from Manchester City teammate Kyle Walker that bounced into his path. And six minutes later, Sterling made it 24 goals in 44 appearances this season for club and country when a curling strike deflected off Ondrej Celustka into the net.

"He was electric all night," Southgate said. "He's looked that way all week in training, and was involved in four of the goals. I'm really pleased for him. It's a special night for him.

"I just think he's really matured as a person and a footballer. He's hungry for those goals now."

The ovation received when he was substituted with 20 minutes remaining shows the high regard for Sterling from England fans who had previously jeered him.

The 18-year-old Chelsea forward had a shot saved on his England debut and the ball dropped to Kalas who turned it into his own net.

England next plays on Monday against Group A rival Montenegro, which drew 1-1 with Bulgaria on Friday. A trophy can still be collected by England this year, with Southgate's side in the final four of the inaugural Nations League in June.

"We play good football, everyone is expressing themselves," Kane said. "We've got young and hungry players and you saw that out there."