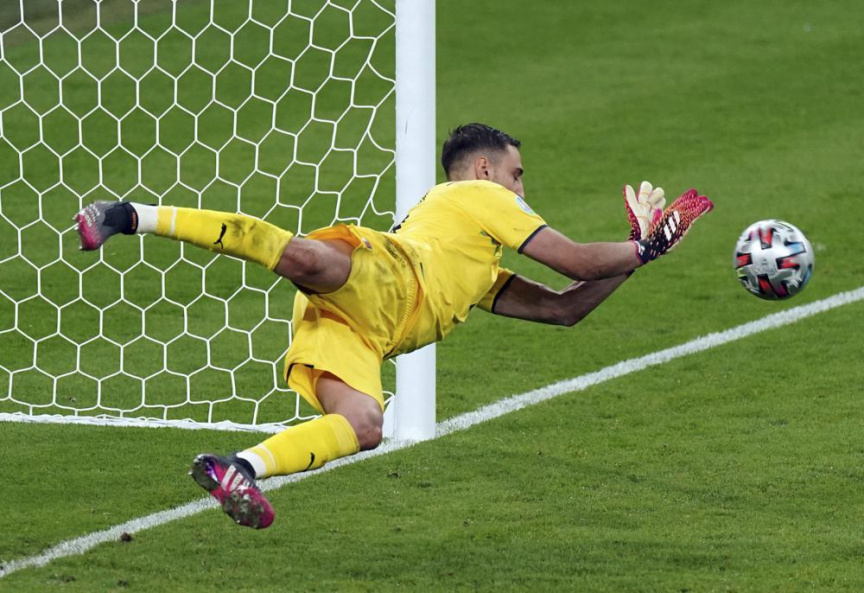 Italy goalkeeper Gianluigi Donnarumma makes a saves on a penalty shot from England's Bukayo Saka during the penalty shootout during the Euro 2020 soccer championship final match between England and Italy at Wembley Stadium in London, Sunday, July 11, 2021. (Mike Egerton/PA via AP)

LONDON (AP) — From Gigi to Gigio, Italy still has a safe pair of hands in goal.

Fifteen years after Gianluigi Buffon helped Italy win the World Cup in a penalty shootout, Gianluigi Donnarumma did the same on Sunday against England in the European Championship final.

Donnarumma made two saves in the shootout, blocking kicks from Bukayo Saka and Jadon Sancho in the 3-2 shootout victory following a 1-1 draw through extra time.

“Despite the goal right at the beginning we always commanded the game and then with penalties there’s Gigio,” Italy captain Giorgio Chiellini said. “We’ve gone from Gigi to Gigio.”

Dannarumma was named player of Euro 2020 moments after the match finished, the first goalkeeper in tournament history to be so honored.

The 22-year-old Donnarumma, who is reportedly moving to Paris Saint-Germain next season, was sobbing on the shoulder of an Italy team staff member after saving the final penalty kick from Saka.

“It’s an incredible night,” Donnarumma said. “If I am the best player of the tournament it is also thanks to (Leonardo) Bonucci and Chiellini. We were extraordinary, we are very happy.”

Donnarumma also saved a penalty from Álvaro Morata in the penalty shootout victory over Spain in the semifinals.

England took the lead early on Sunday, with Luke Shaw scoring the quickest goal in European Championship final history in the second minute, but Bonucci equalized in the 67th.

“We didn’t give an inch. We are a fantastic squad and we deserve all this,” Donnarumma said. “That goal could have killed us, but we’re not those kind of men. We are those type of men who never give up.”

The World Cup final in 2006 also went to penalties. Buffon didn’t make a save, however, as France forward David Trezeguet hit the crossbar. He was the only player to miss.

Donnarumma could turn out to be even better than Buffon, whose nickname was Gigi. He made his debut for AC Milan in 2015, at the age of 16 years, 8 months, and has long been considered the heir to Buffon, who made a record 176 appearances for Italy.

He became the youngest keeper to play for Italy when he replaced Buffon at halftime in a friendly against France in 2016, conceding one goal in a 3-1 loss.

Donnarumma’s youth was brought starkly into light in a tender moment when he arrived at the Italy training camp for the first time, and was dropped off by his parents like a child on his first day of school.

He then kept a clean sheet in his second Italy appearance, when he also replaced Buffon at halftime during a friendly against Germany.

Donnarumma, who has made more than 30 appearances for Italy, has kept plenty more clean sheets since. He helped Italy set a world record for not conceding a goal in international soccer, playing the bulk of the 1,168 minutes.

“We’re very fortunate to have Donnarumma,” Italy coach Roberto Mancini said. “I was sure he would save a couple of penalties because he’s the best goalkeeper in the world.

“He really is a wonderful guy and an incredible goalkeeper.”