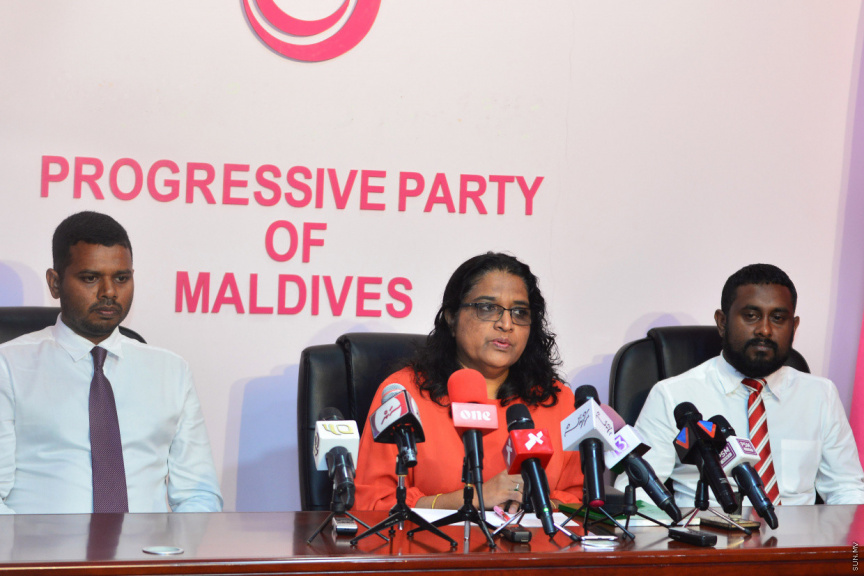 Leader of Progressive Party of Maldives (PPM) and former Maldivian President Abdulla Yameen Abdul Gayoom has appealed the court orders for a freeze on his bank accounts with the High Court.

Speaking during a press conference held by Yameen’s attorneys this Monday, lead attorney, the former Attorney General Aishath Azima Shakoor said the team has appealed the three court orders issued by Criminal Court for a freeze on Yameen’s bank accounts.

‘We believe the court orders clearly violate the Criminal Procedure Code and his political rights guaranteed by the Maldivian Constitution,” said Azima, explaining the two main basis for the appeal with High Court.

“The freeze on President Yameen’s bank accounts in this case is selective and an attempt to influence PPM in the upcoming parliamentary elections.”

Azima said that Yameen was not questioned regarding the money in his bank accounts or even informed of the court orders for a freeze on his bank accounts when he was summoned by police for questioning, which she said strengthened their claim the case was political.

She said the police inquired Yameen about only a certain MVR 22.5 million when he was questioned on two occasions.

Police, in a statement issued following Yameen’s interrogation on December 15, said the authority had investigated Yameen’s accounts at local banks it had been able to identify so far, and noticed a pattern of huge amounts of money deposited to and transferred from his bank accounts during his presidency.

The authority said it had ordered a freeze on the contents of his MVR and USD bank accounts – which amounted to over MVR 100 million.