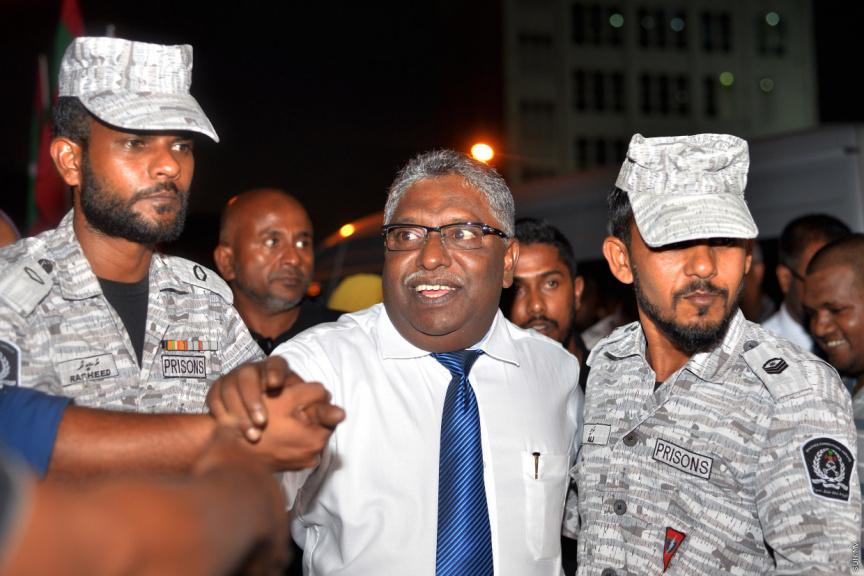 Ali Hameed was sentenced to one year, seven months and six days in prison for obstruction of justice on June 13, 2018 after he refused to surrender his phone to the investigators of the February 1 Supreme Court order.

The sentence was appealed at the High Court on behalf of Ali Hameed. And the court issued its verdict this Wednesday morning; to overturn the conviction by Criminal Court.

The decision was made with the unanimous consensus of the judges.

The High Court addressed the claim in its ruling, and said it’s not clear whether the Criminal Court verified the integrity of the four State witnesses who testified against Ali Waheed.

The court also sided with the argument Ali Hameed was denied the 30-day period required by Article 188 of Criminal Procedure Code between pre-trial submissions and trial.

And also concurred with the argument Ali Hameed was denied sufficient resources to prepare his defense as hearings were held and testimony taken without lawyers present when Ali Hameed was not provided the opportunity to re-hire legal representation after his lawyers recused themselves from the case.

Ali Hameed was charged with obstruction of justice in reference to Article 530 (a) (ii) of the Penal Code.

The court noted this Wednesday that a person losing a phone he uses, or if a person is unable to handover his phone because it’s not in the immediate vicinity or because the person does not know where the phone is, is not grounds to charge a person under Article 530 (a) (ii) of the Penal Code.

The court also noted that though the State prosecution claimed the phone Ali Hameed refused to hand over contained incriminating evidence, the State failed to establish a reason for its claim, or provide evidence to prove the defendant’s guilt beyond doubt as is required under Article 51 of the Maldivian Constitution.

The court also overturned Criminal Court’s order to revoke his license to practice law and license to deliver religious sermons.

The first suspects arrested in connection with the February 1 Supreme Court Order Case; Ali Hameed, former Chief Justice Abdulla Saeed and former Maldivian President Maumoon Abdul Gayoom were all found guilty of obstruction of justice for refusing to surrender their phones and sentenced to prison by Criminal Court.