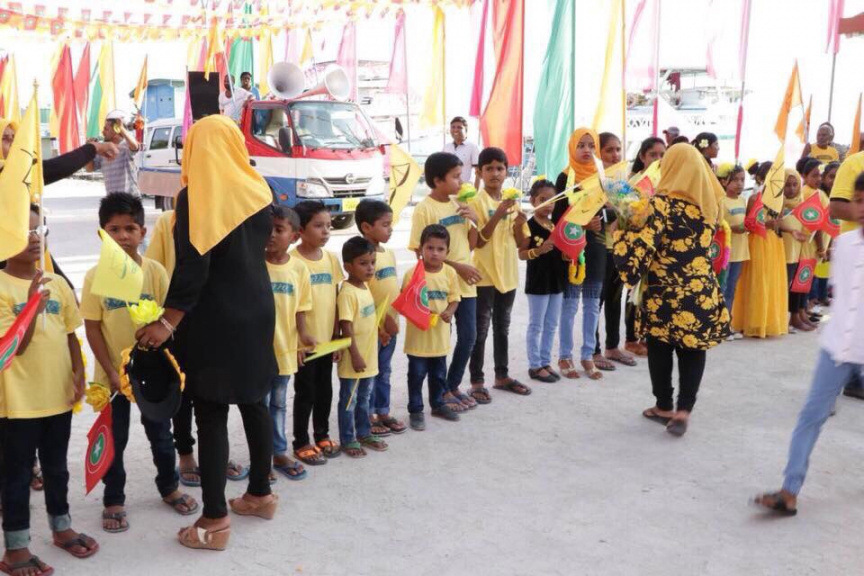 In a tweet last Monday, Nihan alleged children were being exploited in political activities run by the opposition, and attached pictures of children in attendance to welcome opposition presidential candidate MP Ibrahim Mohamed Solih to an island during a campaign tour.

He appealed to Elections Commission, Human Rights Commission of Maldives and Ministry of Gender and Family to look into the matter.

Nihan responded that PPM always requests children below the ages of 18 years not be taken to political events.

“But taking children along to functions is part of the culture at islands. And especially when the President arrives, children will go to welcome him at islands,” responded Nihan.

Yameen himself voiced concern over attendance of children to political events during one of his campaign speeches last Monday.

He said that children were made to wear yellow t-shirts and taken to greet Ibu when he visited islands on campaign tours. But that such scenes will not be seen during his campaign tours.

“When Candidate No. 2, our opposition candidate arrives, we see children wearing yellow t-shirts in attendance to welcome him. We all appeal to them not to task children with political work,” said Yameen.

He said that “no one would know anyone except for Brother Yameen,” even if children were allowed to vote. He said that it was the very reason why children gifted him with drawings of airports when he visited islands.

He said even children were aware of his continued accomplishments.

Nihan calls for an end to political persecutions