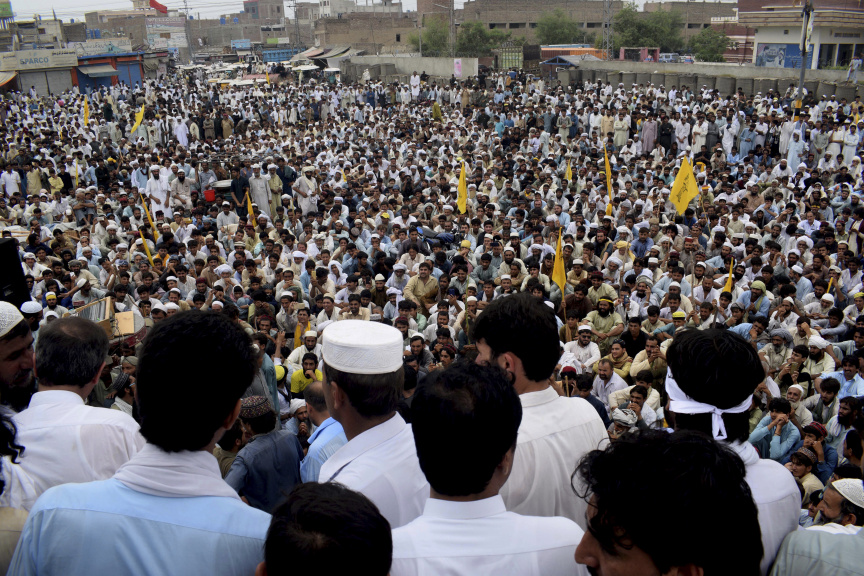 ISLAMABAD (AP) — With Pakistani election officials declaring the party of Imran Khan to be the winner of parliamentary balloting, the former cricket star turned Friday to forming a coalition government, since the party did not get an outright majority.

That will mean finding allies and cutting deals in Pakistan's rough-and-tumble politics — a task made even more difficult by Khan's first address to the nation on Thursday in which he took an uncompromising stand against a culture of corruption and big money.

Sharif, the younger brother of jailed former Prime Minister Nawaz Sharif, had earlier rejected the results, charging widespread fraud and manipulation. He met with representatives of other losing parties to decide on a protest strategy.

Khan's opponents and human rights groups say he won because of widespread fraud and massive manipulation. They allege involvement of Pakistan's powerful military and its intelligence agency known by the acronym ISI. Khan has dismissed the allegations, calling the election the most transparent in the country's 71-year history, which has been dominated by military interference, either directly or indirectly.

A European Union team monitored the balloting and its leader Michael Gahler said, "Overall, the election results are credible."

But the monitors criticized the campaign, saying it was marred by intimidation of some candidates, an effort to undermine the former ruling party and media self-censorship.

"Our overall assessment of the election process is that it is not as good as in 2013," Gahler said.

In a statement Friday, the United Nations said Secretary-General Antonio Guterres congratulated the Pakistani people for voting and reaffirming "their commitment to a democratic Pakistan," but made no mention of the vote's result.

The U.S. State Department, also in a Friday statement, commended "the courage of the Pakistani people, including many women" that turned out to vote. The statement condemned the violence leading up to the balloting, and added that it concurred with the E.U. that the election's successes were "overshadowed by restrictions on freedom of expression and unequal campaign opportunities."

Third place in the National Assembly went to the left-of-center Pakistan People's party with 39 seats.

Smaller parties and independent candidates won the rest of the seats. The Election Commission said vote counting was also still underway in 12 remote areas, offering Khan a possibility of more seats but still not an outright majority.

There will likely be days of negotiation before the makeup of Pakistan's National Assembly and four provincial parliaments are clear and Khan can begin implementing his agenda.

The maneuvering will be watched closely by Pakistan's neighbors as well as regional powers such as China, Russia and the United States. Khan has been critical of the U.S. military involvement in Afghanistan and drone strikes against militants in Pakistan.

Fawad Chaudhry, spokesman for Khan's party, said efforts were already underway to form a coalition, looking to both independents and allies.

In his speech, the 65-year-old Khan vowed to wipe out corruption, strengthen institutions he called dysfunctional and regain national pride by developing international relationships based on respect and equality. He also wants to establish an Islamic welfare state to ensure Pakistan's many poor have a chance at progress.

Adding an uncertain political element, Sharif's PML-N party won 127 of 297 seats in the regional parliament in Punjab, the country's largest province with 60 percent of Pakistan's 200 million people. Khan's PTI took 117 seats, giving neither an outright majority and forcing both to try to form a coalition government. If Khan wants to implement his sweeping agenda, the PTI will need to control the Punjab parliament.

Khan's party won a big majority in the conservative Khyber Pukhtunkhwa province, while the Pakistan People's Party, led by Bilawal Bhutto, the son of slain Prime Minister Benazir Bhutto, won the most seats in southern Sindh's provincial legislature. Pakistan's largest city of Karachi and the country's financial hub is the capital of Sindh province.

Restive Baluchistan province, which is troubled by militant violence, was won by a mix of small parties that will have to form a coalition to rule.