Portugal slump to 3-0 loss against the Netherlands in Geneva 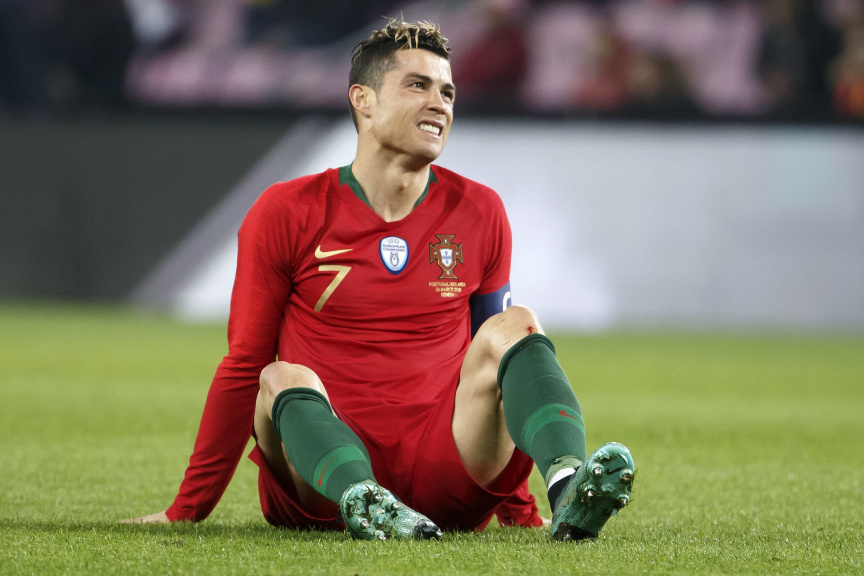 GENEVA (AP) — Portugal was made to pay for a weak first-half display as the Netherlands cruised to a 3-0 win in a friendly on Monday.

Cristiano Ronaldo's evening barely improved after a rough challenge early on by Dutch defender Tonny Vilhena. He left the game after 68 minutes soon after teammate Joao Cancelo was sent off.

The European champions were well beaten by neat Dutch goals from Memphis Depay in the 11th minute, Ryan Babel in the 32nd, and captain Virgil Van Dijk in first-half stoppage time.

Still, Portugal coach Fernando Santos is unlikely to shake up his squad ahead of preparing to play in a World Cup group with Spain, Morocco and Iran.

"I still believe in these players for the World Cup," Santos said through a translator.

The rebuilding project of new Netherlands coach Ronald Koeman looked more promising in Geneva than it did in a lackluster 1-0 home loss against England on Friday.

"We were much more comfortable on the ball and scored first," Koeman said. "That gave us a little bit of confidence."

Two goals were assisted by teenage defender Matthijs De Ligt, and his fellow 18-year-old from Ajax, Justin Kluivert, made his international debut as a substitute late in the game.

Though Portugal exited the Confederations Cup semifinals in a penalty shootout against Chile in June, this was its first defeat inside 90 minutes since gifting Sweden a 3-2 comeback win in a friendly one year ago.

In fact, Portugal has lost a friendly in March for four straight years under Santos.

"Two years ago before the Euros we lost at home to Bulgaria and I didn't lose confidence in the players," the coach said.

The Portugal star reacted furiously at not being awarded a penalty when the score was 1-0. Replays suggested Ronaldo fell after kicking his left foot into the turf as defender Nathan Ake brushed across his back.

The Dutch deserved their lead, and Depay was denied his second goal in the 43rd by Anthony Lopes diving to push away a powerful header.

Without Pepe's veteran presence, the experienced central defensive pairing of Jose Fonte and Rolando — who was substituted at halftime — simply looked slow-footed.

Fonte, playing in the Chinese league, let Depay get in front of him to pounce on a loose ball and open the scoring. It finished off a sweeping Dutch counterattack which saw Van Dijk surge forward in support.

De Ligt went deep into the Portugal defense to create the next two goals, first firing a powerful cross from near the byline that Babel met unmarked with a header.

In his next foray, De Ligt met a free kick with a looped header to tee up Van Dijk, and the Liverpool player fired a shot across the goalmouth into the corner of the net.