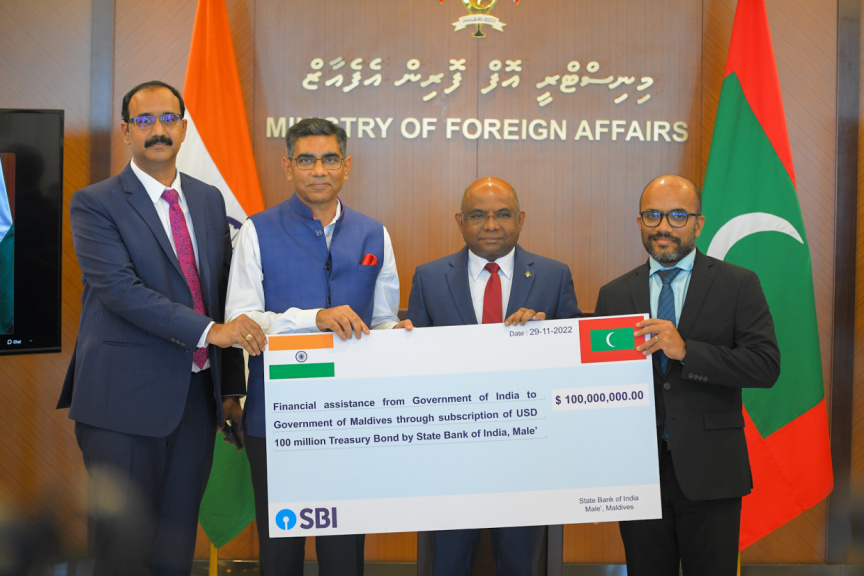 India has provided a loan of USD 100 million as budgetary support to Maldives.

A symbolic cheque was presented by Indian High Commissioner Munu Mahawar to Maldivian Foreign Minister Abdulla Shahid in a ceremony at the Foreign Ministry on Tuesday.

According to the Indian High Commission, the financial assistance was provided in response to a request made by Maldivian President Ibrahim Mohamed Solih during a meeting with Indian Prime Minister Narendra Modi during the former’s visit to India back in August.

The USD 100 million support will be provided through a subscription in Maldives’ government domestic treasury bonds by SBI, Male’.

According to the Indian High Commission, the support was extended without conditions, with the Maldivian government at liberty to use the money to repair the domestic economic situation in line with its own priorities.

The Indian government has provided sovereign guarantee to SBI for the assistance.

“India’s ‘Neighbourhood First’ and Maldives ‘India First’ policies have worked in concert to deliver a partnership that is as solid as it is special, which always produces results, especially in the face of daunting challenges and above all one that responds to the wishes, aspirations and priorities of our peoples,” he said.

He said the progress Maldives has made in foreign relations isn’t something the country achieved by remaining isolated, but by fostering trust and relations with bilateral partners.

The USD 100 million assistance from India is evidence of the faith foreign countries have in Maldives, he said.

Shahid said the relations between Maldives and India were an example to the world.