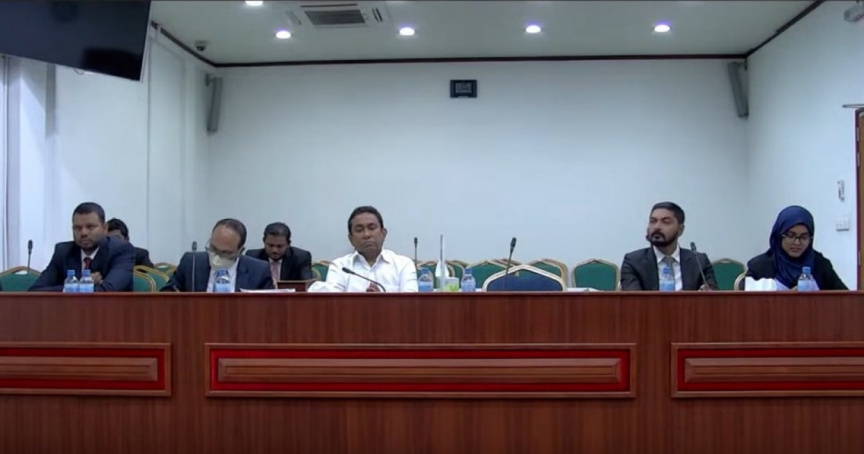 Former President and leader of the opposition Abdulla Yameen Abdulla Gayoom has requested not to accept witness statements submitted as evidence against him in the ongoing trial for his money laundering and bribery case.

Yameen Yameen was charged with money laundering and taking a bribe in connection to the sale of V. Aarah for resort development in November 2021.

The state charged Naeem with giving the bribe.

Currently, discussions regarding the evidence submitted are ongoing in the trial. During the hearing held on Sunday at the Criminal Court, a request was submitted on behalf of Yameen, asking not to accept the witness testimonies given by former Vice President Ahmed Adeeb and the former Managing Director of Maldives Marketing and Public Relations (MMPRC) Abdulla Ziyath.

Yameen’s lawyer said that both Adeeb and Ziyath have lost their integrity and that taking their testimonies would not be permissible under Islamic Shariah.

He went on to claim that there was known enmity from them against Yameen, and that was clear that their testimonies were fabricated.

In addition to this, Yameen’s lawyer said that neither of them had clearly responded to the question asked, and had attempted to paint a certain picture, as clearly seen by the court.

Hence, it was requested from Yameen not accept Adeeb and Ziyath’s statement’s without further evidence to support their claims.

Notably, in the Supreme Court hearing for a previous charge against Yameen, the court decided not to take Ziyath and Adeeb’s testimonies into consideration.

The presiding Judge said during this hearing that he would work towards reaching a sentence before the end of this year.