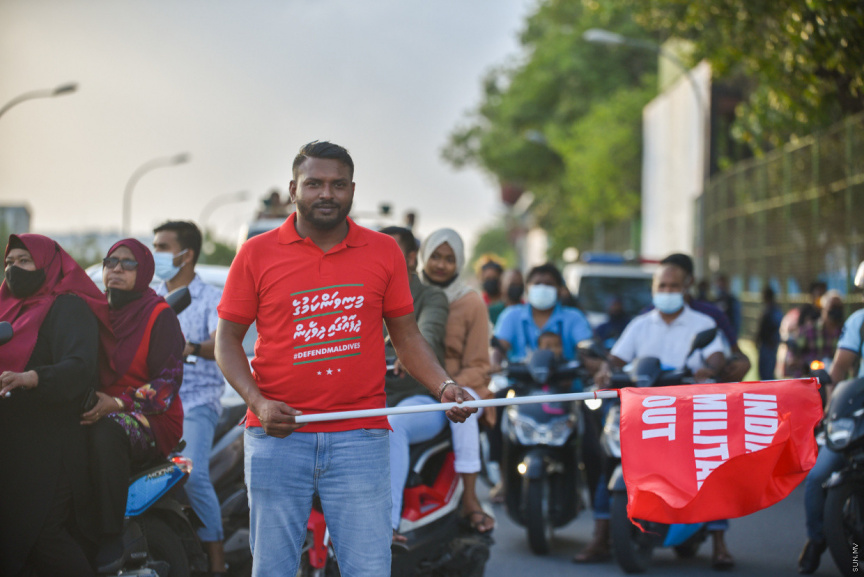 Male’ City’s Deputy Mayor Ahmed Nareesh – one of former President Abdulla Yameen Abdul Gayoom’s witnesses in the case against him over the sale of V. Aarah for resort development – came to the court coached, prepared to misrepresent the facts surrounding the case, states the prosecution.

Yameen is on trial for money laundering and bribery in connection to the sale of Aarah – which took place during his administration.

He is accused of abusing his position and taking a USD 1 million bribe to facilitate the sale of Aarah to Yoosuf Naeem, a former parliamentary representative for Felidhoo constituency, and laundering the money.

Both pled ‘not guilty’ to charges.

The Criminal Court hearing Thursday focused on arguments about the witnesses.

Nareesh had previously testified that he counted MVR 15 million in cash by hand at Yameen’s the-residence – G. Dhoovehi – and took the money to Yoosuf Naeem’s residence.

The prosecutor said that Abdulla Rasheed’s testimony proved that it hadn’t been him but Nareesh who had made all the arrangements and had physically taken the money from Yameen and handed it over to Yoosuf Naeem.

The testimonies of the defense witnesses therefore completely conflicts with stated reason they were produced as witnesses, said the prosecutor.

The two defense witnesses testified that Yameen had called them and invited them to Dhoovehi to take the money to Yoosuf Naeem.

“Ahmed Nareesh testified without hesitation that he had been home when Yameen made the call, without taking even a moment to recall the fact,” said the prosecutor.

Nareesh testified that he met Yameen in the living room of Dhoovehi, collected the money, and took it to Yoosuf Naeem on a gray car that belonged to a friend. Nareesh said he had been in the front passenger seat of the car, and that Abdulla Rasheed had been in the backseat.

Nareesh hadn’t hesitated to testify as to where the money bags were, said the prosecutor.

“While he recalled such minor details with such ease, the prosecution asked him during cross examination what time the transaction took place – whether it was day or night,” said the prosecutor.

The prosecutor said Nareesh had been unable to say whether it had taken place during day or night, despite making three trips on the streets of Male’ to make the transaction.

Nareesh also claimed he could not recall details of the numerous other transactions he made on Yameen’s behalf, said the prosecutor.

“This shows the witness came to trial claim something happened when it didn’t, to structure his testimony a specific way. We say this because he was able to recall minor details. But he said he doesn’t remember when asked whether it happened during day or night,” said the prosecutor.

The prosecutor said Nareesh had therefore come to court coached to answer questions the prosecution may ask.

The same is true of Abdulla Rasheed, said the prosecutor.