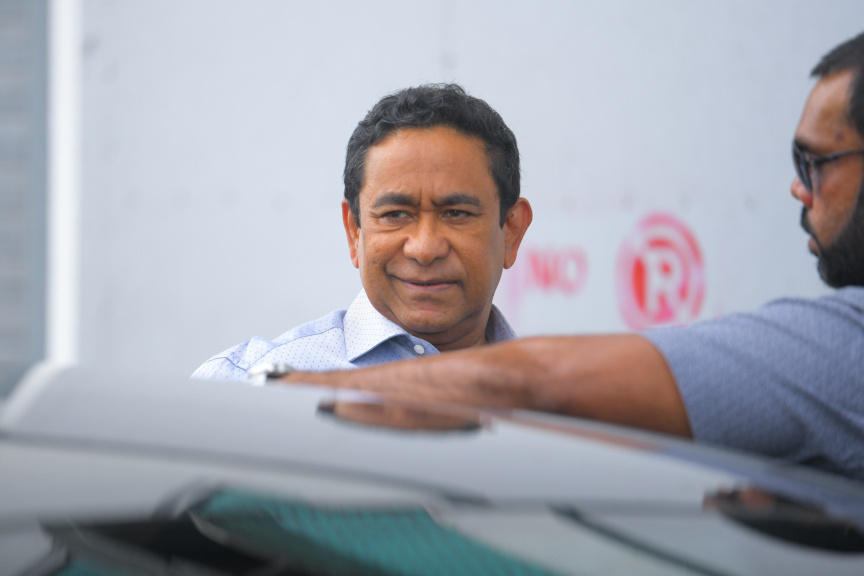 Thursday’s hearing in the money laundering and bribery case against former President Abdulla Yameen Abdul Gayyoom in connection to the sale of V. Aarah for resort development was called into recess mere minutes after the hearing commenced.

The hearing was called into recess as the prosecution objected to proceed with the hearing in the absence of the second defendant in the case, Yoosuf Naeem, a former parliamentary representative for Felidhoo constituency.

He is accused of misusing his position and taking a USD 1 million bribe to facilitate the sale of Aarah to Naeem and laundering the money.

The state has charged Naeem with giving the bribe.

The hearing scheduled in the case for 9:30am this morning commenced approximately an hour later. Whilst announcing the commencement of the hearing, Criminal Court’s Chief Judge Ahmed Shakeel who presides over the case, said that Naeem was not in attendance due to illness.

He went on to detail that a hearing with respect to Naeem’s component would nevertheless be held today, at a later time. With reference to this, he had inquired whether there was any objection to proceed the hearing on Yameen’s component.

The prosecution had objected to proceed with the components separately, requesting a joint hearing.

Therewith, Judge Shakeel called the hearing into recess to proceed with components of both defendants jointly. The hearing is set to resume at 1:00pm.

The last hearing in this case was held on October 5.