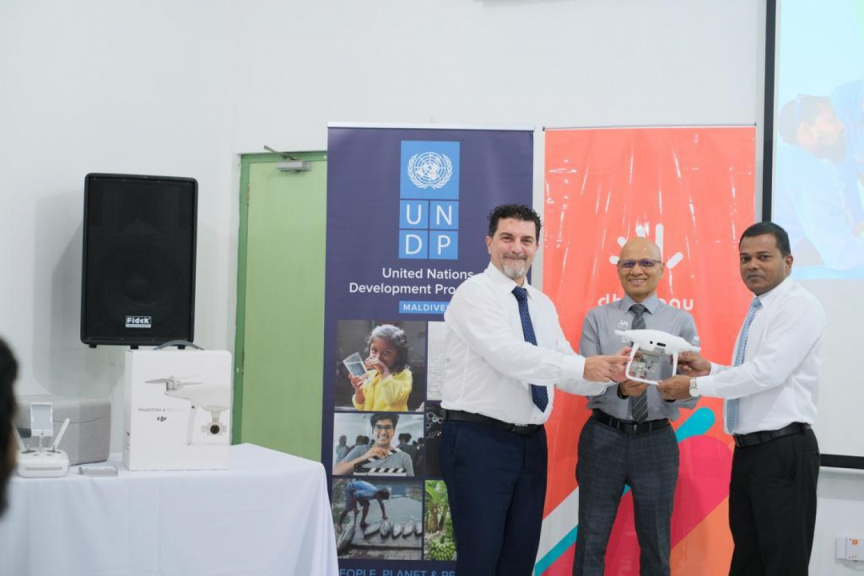 Closing ceremony for the ‘Drones for Resilience’ project in Addu City on November 2, 2022. (Photo/UNDP)

She made the remark during the closing of the ‘Drones for Resilience’ project run by Dhiraagu and the United Nations Development Program (UNDP) in Addu City on Wednesday.

The ‘Drones for Resilience’ project promotes the use of drone technology for community-based disaster resilience planning in Maldives.

Under the project, orthomosaic maps of all constitutional islands of Addu City, drones, and training were provided to Maldivian Red Crescent volunteers based in Addu City with the engagement of Addu City Council.

The ‘Drones for Resilience’ project seeks to address the challenges faced by the Maldives when it comes to data collection - especially on disaster risk reduction.

The project’s objective is to improve the capacity of Addu City to undertake risk-informed planning and develop evidence-based climate action plans. It focuses on incorporating drones to create detailed, real-time maps of islands to be used in disaster risk assessment. The collected data improve local authorities' capacity for disaster preparedness and disaster risk management.

Speaking at the closing ceremony, Shauna said that technologies like drones and artificial intelligence have immense potential.

“Technologies like drones and artificial intelligence have immense potential. The Government remains committed to support the introduction of these technologies in combating the national challenges faced by our islands and cities,” she said.

Speaking at the ceremony, Dhiraagu’s CEO and MD, Ismail Rasheed said the company is happy to join forces with UNDP to deliver the project to Addu.

“Protection and preservation of the environment is a key focus area of our Corporate Social Responsibility program. The high resolution and high quality orthomosaic baseline digital maps of all the inhabited islands in Addu City produced and the equipment, training and know how delivered as part of the project will be valuable tools that can be used to make data driven decisions and build resilience into the city’s development plans, taking into consideration climate change and growing environmental threats,” he said.

Addu City Mayor, Ali Nizar said the city council believes the technology will be a great tool for their team to do evidence-based city planning, especially as they develop land use plans for Addu.

“The data collected from latest digital technologies will be beneficial for disaster risk reduction, as well as increasing our capacity for disaster preparedness,” he said.

Drones can be deployed rapidly and conveniently to assess damages from disasters. Analysis can be done on high-risk areas such as coastal zones to assess loss due to slow-onset degradation from climate change, and safe zones within the islands. Innovations in Disaster Risk Reduction can also be applied to other areas, such as land-use planning, green projects, and utility mapping, particularly if these innovations could be linked to satellite imagery.

UNDP Resident Representative in Maldives, Enrico Gaveglia alluded to how the project contributes to the Sustainable Development Goals (SDGs) – specially to enhance resilience and adaptive capacity to climate-related hazards and natural disaster.

“We believe in the replicability and scalability potential of ‘Drones for Resilience’. Coupled with the Government’s ambition to push for stronger autonomy of local governments through decentralization policies, there is potential for the application of the technology to greatly benefit the work of councils across the Maldives and equip them with science-based knowledge for decisions that benefit people and the environment,” he said.

The innovative project combined drone mapping with techniques to capture quality images in order to improve the GIS, which was accessed through Dhiraagu.

The collaboration between UNDP, Dhiraagu, MRC, the local community, the local government and the private sector has been hailed as an example of a successful public-private partnership at the local level.

App launched for the visually impaired to access info