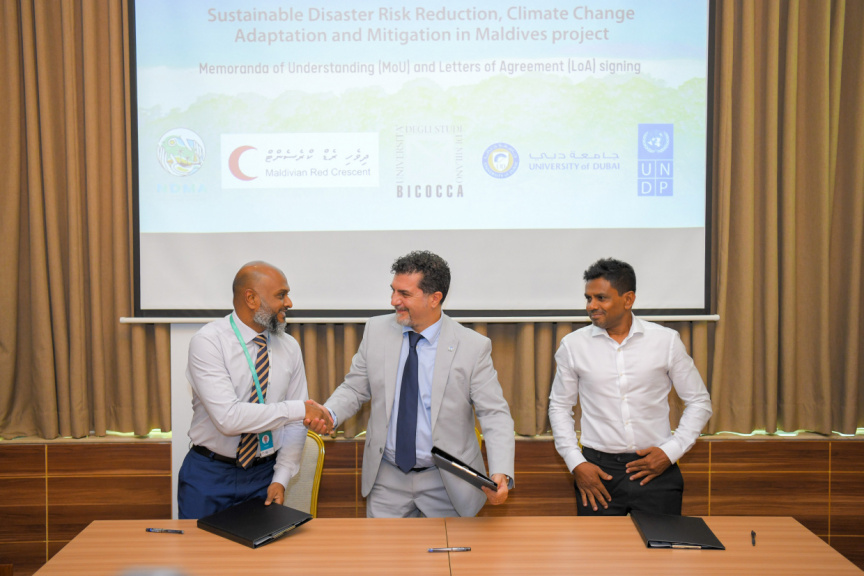 A Memorandum of Understanding (MoU) has been signed between to further broaden the sustainable disaster risk reduction program in the Maldives.

The signing ceremony held on Sunday was attended by officials from the United Nations Development Programme (UNDP), the National Disaster Management Authority (NDMA), the Maldivian Red Crescent (MRC), the University of Bicocca-Milano and the University of Dubai.

Speaking at the ceremony Hisaan said that the Maldives has made substantial legislative reforms since the Sendai Framework was adopted in 2015, providing the groundwork for institutionalizing disaster management and risk management initiatives.

The Sendai framework was the first major agreement of the post-2015 development agenda and provides Member States with concrete actions to protect development gains from the risk of disaster. This regime plans to achieve the goals set in the framework under its Strategic Action Plan 2019-2023.

“His Excellency President Ibrahim Mohamed Solih’s administration has taken several landmark initiatives and policy decisions both at national and international levels to protect our oceans, preserve our environment and combat climate change. The most significant of these changes has been the implementation of the disaster management act and the establishment of the National Disaster Management Authority in 2018,” he said.

He further stated that the NDMA is legally required to coordinate and mainstream disaster management efforts for the entire nation. In fact, this has changed how we prepare for and react to emergencies and disasters in fundamental ways. The paradigm of catastrophe relief and the response has given way to one of proactive disaster risk management. It is without a doubt a significant change in the way we talk about catastrophe management and how we approach policy.

He also said that after the inclusion of MRC in the MoU, it will be easier to achieve the goals set in both the strategic action plan of the government and the Sendai framework.

He believes that this Mou will make it easier to raise awareness of drastic weather changes in the whole community and that it will be an encouragement to the work already being conducted to decrease disaster risk.

Resident Representative Gaveglia also spoke at the ceremony and said that its widely believed international aid is often perceived as scattered and siloed in Maldives.

“UNDP’s role is to frame a new set of cooperation that bring the best of the global practice and delivers to communities’ solutions in the immediate. Taxing national partners and people with endless consultations around issues and plans has now to give way to concrete transformative change. This is why we are here,” he said.

UNDP stated that in order to implement efforts supporting Maldives' policies and to establish the necessary conditions for disaster risk reduction planning and execution at the island community level, it is important to strengthen and deliver concrete actions, collaboration, and communication between national and subnational governments.

App launched for the visually impaired to access info