Naseem conferred Order of Dignified Rule of the Muleege Dynasty 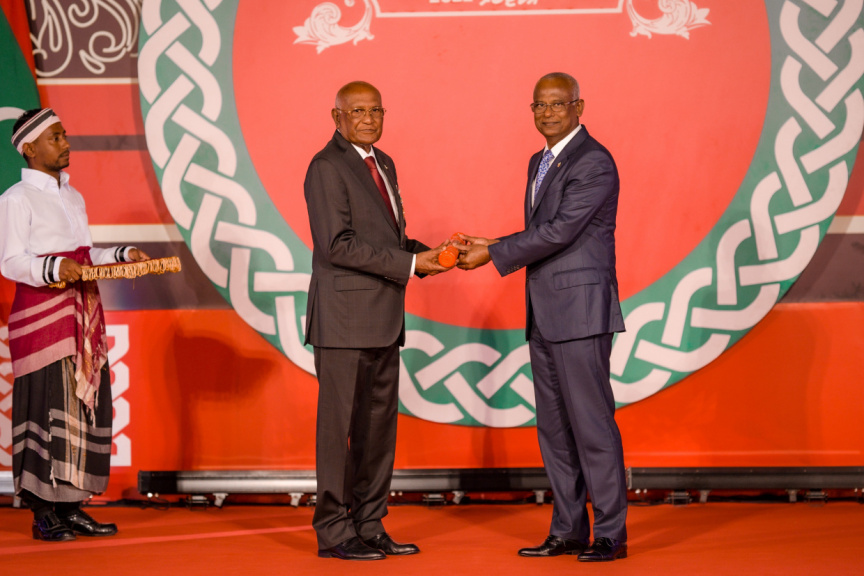 Health Minister Ahmed 'Kerafa' Naseem has been conferred the Order of the Dignified Rule of the Muleege Dynasty.

He was presented with the honor by President Ibrahim Mohamed Solih during a function held at Dharubaaruge on Thursday evening to present national awards.

The Order of the Dignified Rule of the Muleege Dynasty commemorates the rule of Sultan Muhammad Shamsuddin.

Naseem was conferred the honor in recognition of his contribution to Maldives tourism sector, and over 37 years of public service.

Naseem is one of the pioneers of tourism in Maldives.

He had been a junior employee at the Maldivian embassy in Colombo when he met with George Corbin, an Italian travel agent, who he accompanied to Maldives and introduced to his friends - Hussain ‘Champa’ Afeef and Mohamed Umar ‘MU’ Manik – who shared his vision of introducing tourism to Maldives.

They brought the first group of tourists to Maldives on February 16, 1972, and opened Kurumba – Maldives’ first tourist resort – on October 3, 1972.

This year marks 50 years to the introduction of tourism in Maldives.

Speaking at the ceremony, President Solih said he believes that Naseem's contributions and services to the country should be recognized and celebrated at a national level.

“Minister Naseem is one of the pioneers of tourism industry in Maldives. He worked single-mindedly based on his belief that tourism will grow and thrive in Maldives at a time there wasn’t a single ray of hope the Maldivian tourism industry would rise to the heights it is today,” he said.

President Solih also commended Naseem for his contribution to the Maldives in other areas, especially in the area of foreign service.

“He does whatever is asked of him by whoever the president of the time may be, with dedication and sincerity,” he said.