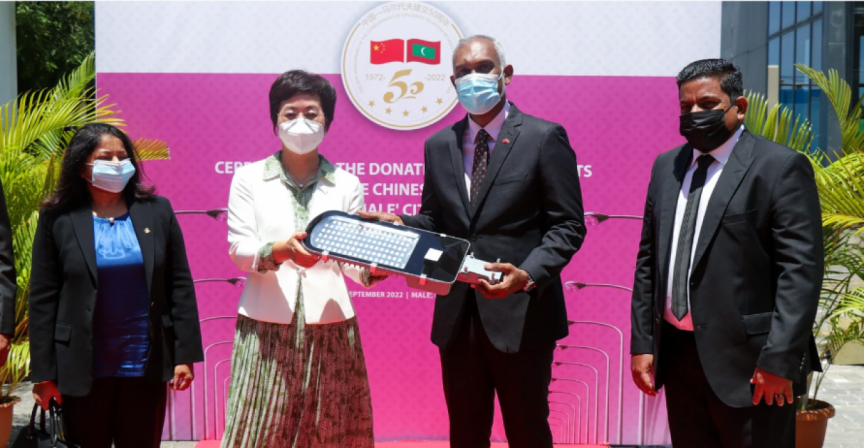 Government of China has donated 3,000 streetlights to Male’ City Council.

The streetlights were handed over at a special ceremony held on Monday, by the Chinese Ambassador to the Maldives Wang Lixin. Male’ City Mayor Dr. Mohamed Muizzu received the items on behalf of Male’ City Council.

Speaking after the handover, Mayor Muizzu said that the generous donation would allow the council replace the old streetlights installed at Male’ City and Vilimale’ with modern and bright LED streetlights, which uses less electricity.

Mayor Muizzu also noted that during an official meeting held with Ambassador Wang recently, she was briefed on the undertakings of Male’ City Council for the development of Male’ City, their services and responsibilities.

He said the result of this meeting was the streetlights donated by the Chinese government today.

He also thanked the Chinese government for the continuous assistance rendered in the infrastructural development of Male’ City, their commitment to improve living standards of Male’ residents.

Underscoring that China Embassy in the Maldives maintains close ties with Male’ City Council – Mayor Muizzu stressed that the Embassy continue to provide assistance and support to City Council’s works.