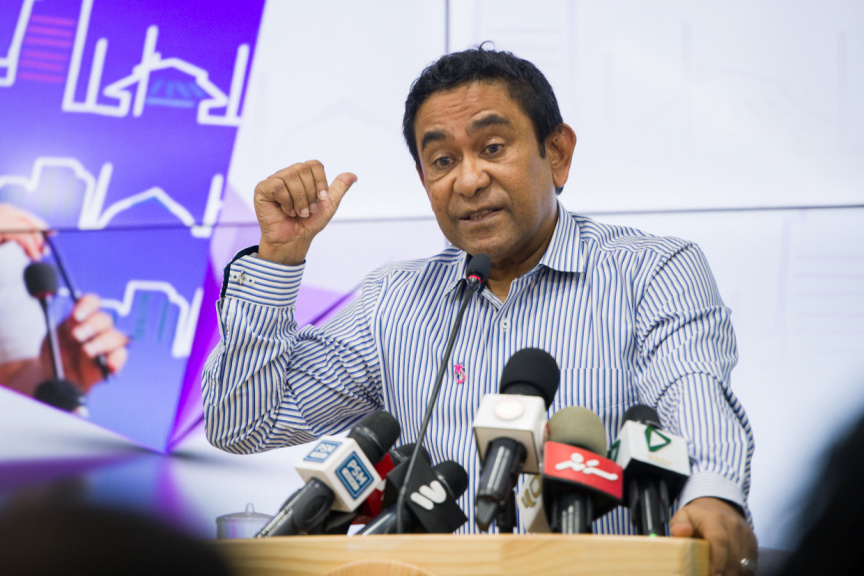 He made the comment in response to a question regarding the reason for the decision to suspend the opposition’s ‘India Out’ campaign, in an interview to SanguTV on Friday.

Yameen said he made the decision to suspend the campaign against Indian military presence in Maldives because of the presidential decree banning the campaign.

He said he did not want to create any further turmoil.

“The ‘India Out’ movement will continue. But I don’t want to be involved in tours of islands and all that because I want to abide the law,” he said.

Yameen said it doesn’t make sense for a presidential candidate to violate the law.

He said the Maldivian people are greatly disillusioned as they face the upcoming presidential elections. He also maintained that the presidential decree banning the ‘India Out’ campaign is illegal.

Yameen said that though he stands by his assertion the presidential decree is illegal, he knows the police will enforce the decree.

He said he sees the police response in face of protests.

“They act violently and use excessive force. I lead the ‘India Out’ movement and tour islands. And when we go, the police are forced to tell us that we cannot carry out our activities because of the presidential decree,” he said.

Yameen said the law president does not have the authority to issue a decree or regulation that has the force of a law, and that existing laws do not prohibit the ‘India Out’ campaign.

He said that though certain statutes may be suspended during a state of emergency, in normal circumstances, the orders the people must abide by comes from orders and regulations backed by existing laws.

President Ibrahim Mohamed Solih had issued the decree in question on April 21, deeming the ‘India Out’ campaign a threat to national security.

He said in his decree that the ‘India Out’ movement was a deliberate attempt to hinder the longstanding relations between Maldives and India, and international efforts to maintain security in the region, and that incitement to hatred against a specific country put Maldives at risk of loss of peace and stability, huge economic and social burden, and isolation in the international arena.