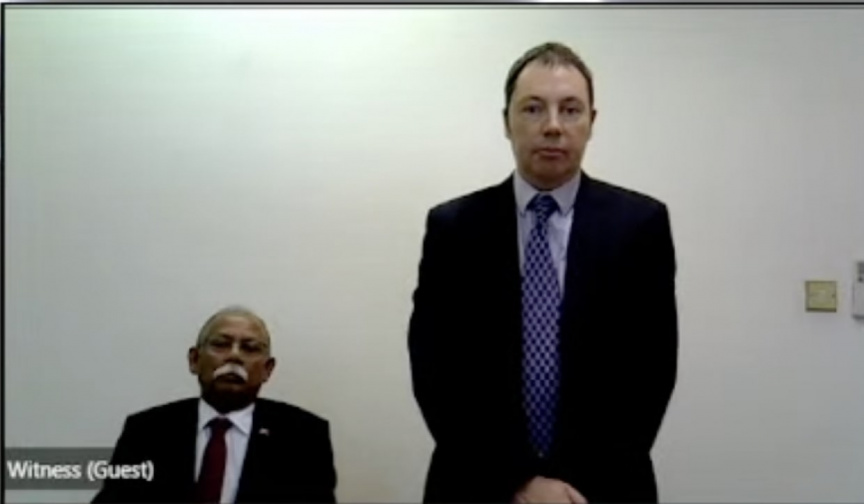 The British digital forensic examiner who extracted data from phones seized as evidence in Aarah case testifies on August 23, 2022.

The Criminal Court on Tuesday heard testimony from the digital forensics examiner who extracted data from three phones seized by authorities as evidence in the investigation into the sale of V. Aarah for resort development.

Former president Abdulla Yameen Abdul Gayoom is on trial for money laundering and bribery in connection to the sale of the island.

On Tuesday, the court heard testimony from a British digital forensics examiner who extracted data from three phones seized by authorities as evidence in the case.

He joined the hearing virtually, from the Maldivian Embassy in the UK.

He testified that the three iPhones in question were sent to Athena Intelligence, where he worked, on December 2, 2015.

The witness, who has 19 years of experience working as a digital forensic examiner, said he did not know the owners of the three phones. He said he managed to extract data from two phones, and the third phone defaulted.

He said that though he shared the data extracted with Simon Atkinsons, which sent the phones to Athena Intelligence for analysis, copies of the documents were sent to the police six years later.

He said he confirmed permission from the owners of the phones before extracting data, and extracted data from two phones in one day.

He said he extracted text messages from one of the phones. The prosecution objected when the defense when they questioned the witness regarding whether any of the text messages were related to Aarah, stating that the witness wasn’t the one who analyzed the data.

The judge sustained the objection and instructed the defense not to question the witness regarding the text messages extracted from the phones.