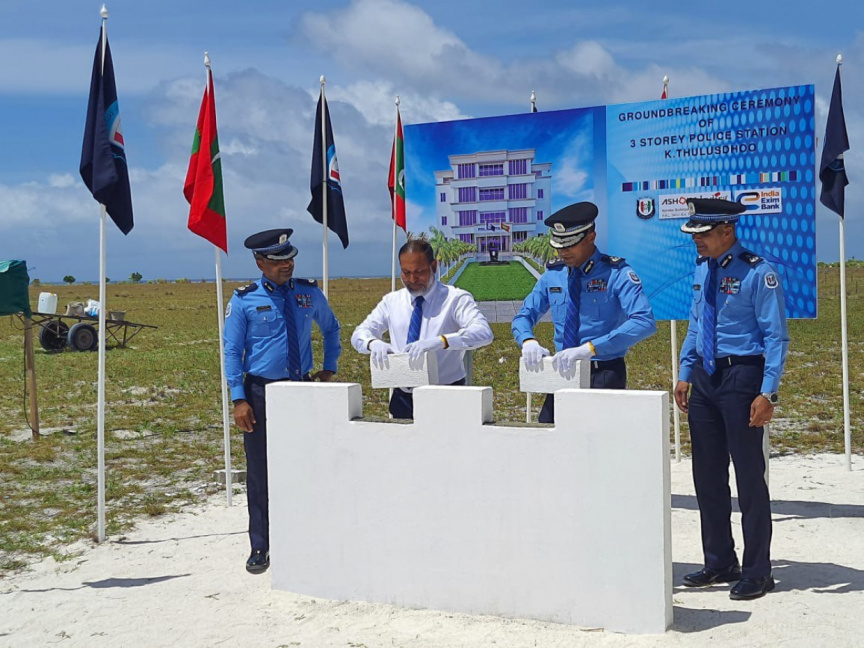 Ground breaking ceremony for the biggest police infrastructure development project in the Maldives to date was held on Wednesday.

In the recent four-day official visit undertaken by President Ibrahim Mohamed Solih to India at the invitation of Indian Prime Minister Narendra Modi, six key agreements were executed between both nations.

One of the key agreements signed in this regard was the Memorandum of Understanding (MoU) between India’s EXIM Bank and Maldives’ Finance Ministry regarding a buyer’s credit financing of police infrastructure in the Maldives.

The ground breaking ceremony for the project was held at K. Thuludhoo Police Station earlier today, which was officiated by Home Minister Imran Abdulla.

Under this project, a total of 61 policing facilities including police stations at islands, divisional headquarters, police posts and detention facilities will be constructed.

Maldives Police Service (MPS) signed an agreement with India’s ABL Indira Project JV for the implantation of the project on a design and construction basis back in this July.

They detailed that the completion of the project would fulfill the requirements of MPS to have adequate police facilities to ensure safety of Maldivian citizens and tourists and assist in upholding international standards required for custodial facilities.

This project was initially announced during India’s External Affairs Minister Dr. S. Jaishankar’s official visit to the Maldives in March of this year.

The project is financed by a buyer’s credit of USD 41 million from EXIM Bank.

One of the major projects that have taken place in this avenue is the National College of Policing and Law Enforcement developed at Addu City with grant assistance from India.