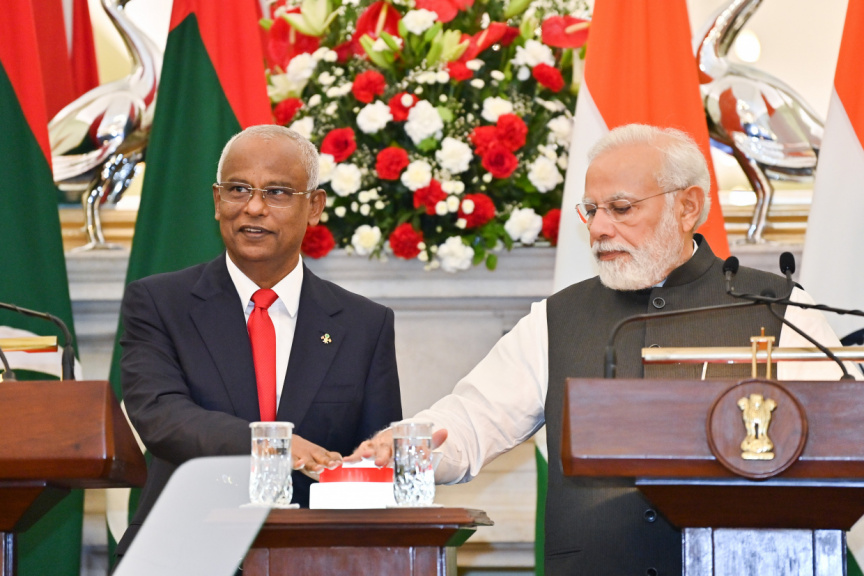 Maldivian President states India has proved itself to be a true friend to Maldives, and that its cooperation in the area of defense and security deserves gratitude.

President Solih, who is on an official four-day visit to India, made the comment in a joint press conference with Indian Prime Minister Narendra Modi on Tuesday afternoon.

President Solih and PM Modi said high-level engagements between Maldives and India had served to enhance centuries-old between the two neighboring countries.

President Solih said he was grateful for the continued cooperation and support from India in areas of infrastructure development and human resource development in Maldives.

He also thanked India for the assistance it provided to overcome the COVID-19 pandemic.

Both leaders described the Maldives-India defense and security partnership as a leading example of regional cooperation in the areas of transnational crimes and disaster relief.

“This partnership is a force for stability in the Indian Ocean Region,” they said.

Both agreed that the security of Maldives and India are inter-linked, reiterated their assurance to be mindful of each other’s concerns on the security and stability of the region, and to not allow their respective territories to be used for any activity inimical to the other.

They condemned terrorism in all its forms and called for enhanced coordination between the security agencies of the two countries to thwart radicalization, violent extremism, terrorism and narco-trafficking.

President Solih is in India on a four-day visit at the invitation of PM Modi.

He is accompanied on the visit by a Maldivian delegation of senior government officials including Finance Minister Ibrahim Ameer, Economic Minister Fayyaz Ismail, and Gender Minister Aishath Mohamed Didi, and representatives of leading businesses.

During the visit, President Solih and PM Modi virtually initiated and viewed the pouring of first concrete of the Greater Male’ Connectivity Project, and witnessed the signing of MOUs in areas of collaboration on potential fishing zone forecast capacity building, cooperation in the area of cyber security, capacity building of women development committees and local government authorities of Maldives, cooperation in disaster management, as well as a USD 41 million buyer’s credit agreement to construct police infrastructure, and a letter of intent for buyer’s credit financing of 2,000 social housing units.

PM Modi also announced the offer of a new line of credit of USD 100 million to finance infrastructure projects in Maldives.