Sports Minister: Will not organize music and yoga events if declared haram 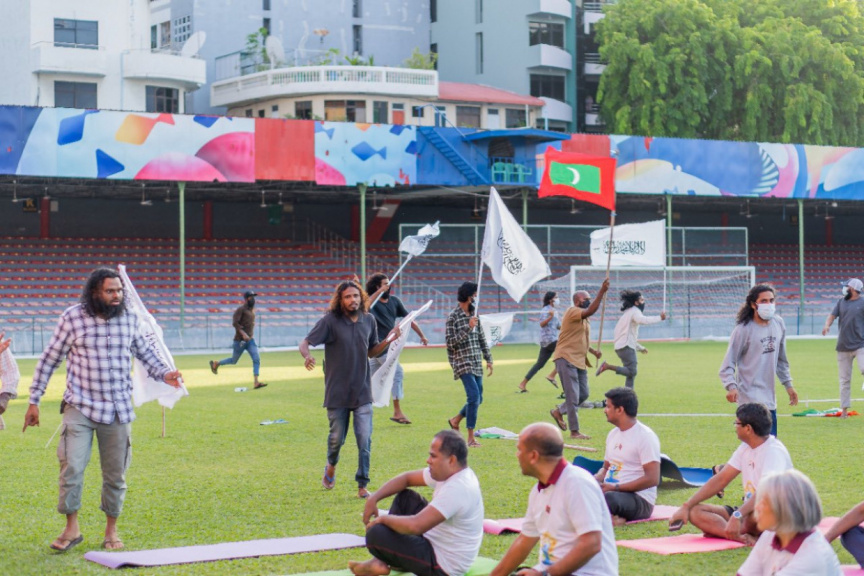 Minister of Sports, Youth and Community Empowerment Ahmed Mahloof told the Parliament on Tuesday that his ministry would not organize music and yoga events if they were declared haram.

Mahloof was summoned to the Parliament to answer questions on Tuesday morning.

In response to a question, Mahloof said the mob attack on the event held to celebrate the International Day of Yoga last week was politically motivated.

He said that the event had been held in Maldives annually throughout different administrations, and that the recent attack was staged by misleading the public to serve a political purpose.

“But are we to believe when some sheikh says that something that scholars have a difference in opinion over is haram?” said Mahloof.

The event, organized by the Indian Cultural Center and the Sports Ministry, was held on the morning of June 21, and was attended by dozens of participants, including foreign ambassadors such as Indian High Commissioner Munu Mahawar, diplomats, and government officials.

A letter was leaked on social media over the weekend, signed by Islamic Ministry’s Senior Executive Director Hisham Ahmed and addressed to Commissioner of Police Mohamed Hameed, asking the police to stop the practice of yoga in Maldives.

The letter said that yoga, despite its widespread use for meditation, exercise and healing, was not permissible for Muslims, due to its use in Hindu worship.

The letter was dated June 15, a few days before the Yoga Day event was held.

However, the Islamic Ministry said in a statement on Monday that the letter wasn’t sent in response to the Yoga Day event, and that the fatwas referred to in the letter were issued in violation of procedures.

“We hereby inform that we will seek a detailed fatwa regarding the Islamic stand on yoga from the Supreme Council of Fatwa in Maldives and release it,” said the ministry.

Police have arrested 21 suspects in connection to the mob attack on the event, including local Islamic scholars Al-Sheikh Adam Nishan and Al-Sheikh Mohamed Fazloon.