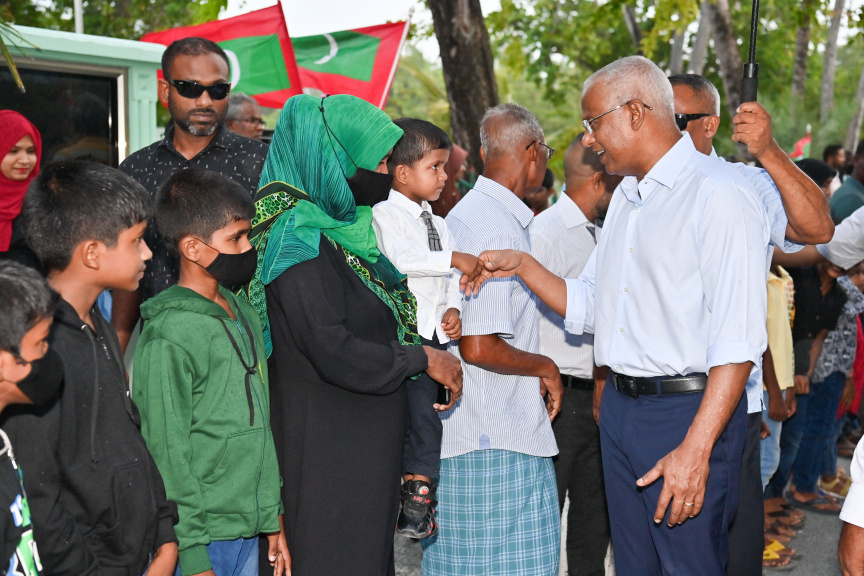 President Ibrahim Mohamed Solih states funds would be earmarked in the budget to commence the land reclamation project in Sh. Funadhoo next year.

He made the comment during the function held on Friday evening to celebrate Funadhoo School’s 50-year anniversary.

Speaking at the function, President Solih highlighted on key development projects planned for Funadhoo. He said that as per the request of Funadhoo residents, the island would be added to the list of islands on 2023’s budget for land reclamation projects, to accommodate the island’s growing population.

He also promised his administration would also work as quickly as possible to commence a coastal protection project in Funadhoo, an island which is experiencing severe erosion along all its coastlines.

President solih said his administration was committed to ensuring inclusive education and the right for every child to quality education and learning.

He said that there were 203 education infrastructure projects currently in progress in different stages of development.

He said that the project to develop 15 classrooms in Funadhoo School would be complete in December.

“The most pressing need of this school right now is an administrative building, including a staff room. In Sha Allah, that project too, will be included in next year’s budget,” he said.

President Solih said the most significant contribution to the community, and most prominent achievement of Funadhoo School, was the human resources it helped develop over its 50-year-long history.

“Scores of individuals who graduated from Funadhoo School are currently serving in senior positions in various institutions in this island and this region,” he said.

President Solih spoke of Funadhoo School’s achievements, including boasting one of the highest pass rates in Dhivehi and Islam, and producing top achievers.

Funadhoo Council’s president Mohamed Shiyam said that President Solih met with members of the council, as well as officials from health centers and hospitals in the atoll during his trip.

“That there are certain medicines we haven’t gotten access to in over a year. We asked him to monitor it more closely. Speaking about the need to improve the healthcare facilities, we spoke of the shortage in medicine and certain equipment,” he said.

Shiyam said the President provided assurance he would discuss the issues with relevant authorities and provide solutions as soon as possible.