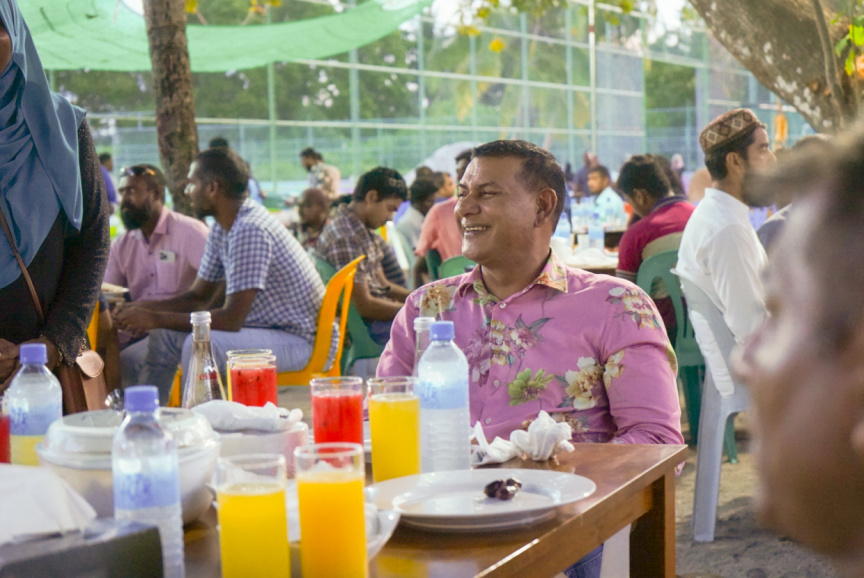 Sun Group’s Chairman, parliamentary representative of Meedhoo constituency Ahmed Siyam Mohamed, on Friday, has hosted an Iftar for the residents of N. Kudafari, his birth island.

The Iftar was held at the compound of Masjid-al Shameema Abdulla, a mosque built in 2012, funded by Siyam, in the memory of his mother.

Whilst approximately 500 people currently reside at Kudafari – almost all residents attended the Iftar.

Short eats, other foods and drinks for Iftar were prepared by Kudafari residents, in their homes. The cost of the preparation of all items for the event was covered by Siyam.

An iftar, sponsored by Siyam, is usually held during Ramadan at Kudafari most years.

Ahead of Ramadan this year, Siyam also sponsored a ‘maahefun’, a special traditional feast, for Kudafari residents.

However, this year’s Iftar was extra special as foundation was laid for additional mosque funded by Siyam at Kudafiri during the event. It also saw foundations being laid for two houses to be constructed for two vulnerable families residing at the island which are being funded by Siyam.

Noting Siyam’s generousness – everyone who spoke to Sun from the island had expressed their gratitude and gratefulness for all that has been done for them.

Police probe physical abuse of minor by use of fire