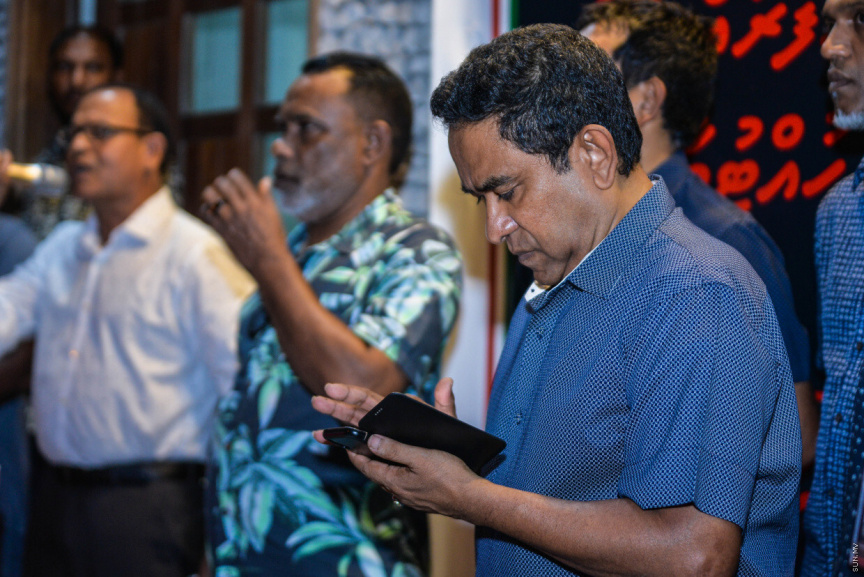 Former President Abdulla Yameen Abdul Gayoom’s lawyers argued on Monday that USD 1 million linked to the sale of V. Aarah for resort development wasn’t a bribe as the state alleged, but transaction he made to purchase US dollars.

The former president with money laundering and taking a bribe in connection to the case in November 2021.

Naeem has been charged with giving a bribe in the same case.

In a hearing at the Criminal Court on Monday morning, before the court ruled the trial can proceed based on civil standard of proof, Yameen’s lawyer, former Vice President Dr. Mohamed Jameel Ahmed questioned the credibility of the two state witnesses in the case; former Vice President Ahmed Adeeb Abdul Gafoor – who had replaced Jameel himself in Yameen’s Cabinet – and former Managing Director of Maldives Marketing and Public Relations Corporation (MMPRC) Abdulla Ziyath.

Both Adeeb and Ziyath have been convicted of charges in connection to the MMPRC graft scandal.

Jameel said that neither of them had anything to do with the case against Yameen, and that there were no additional witnesses to corroborate their testimony.

Jameel said that Yameen did not engage in bribery and that the transaction between Yameen and Naeem had been regarding the purchase of US dollars.

He said that the money wasn’t something he received in exchange for something, and that Yameen did not profit from the transaction.

The state prosecutor responded that Yameen had not been in a position that allowed him to engage in any business at the time the transaction took place, as the constitution prohibits sitting presidents from involvement in business.

Article 119 (a): President and Vice President shall not hold any other public office or office of profit, actively engage in a business or in the practice of any profession, or any other income generating employment, be employed by any person, buy or lease any property belonging to the State, or have a financial interest in any transaction between the State and any other party.

Jameel accused the prosecution of attempting to frame Yameen.

The prosecutor responded that he did not believe execution of the responsibilities of the Prosecutor General’s Office constituted framing a person.

CASE CAN PROCEED BASED ON CIVIL STANDARD

Judge Ahmed Shakeel decided that the case against Yameen can proceed based on civil standard of proof.

He initially gave 10 days for submission of pretrial motions, stating that it was the standard practice.

However, Naeem’s lawyer requested 30 days to submit pretrial motions, arguing that 10 days was far too short a period for such a big case.

Yameen’s lawyers backed the request. They said that given the nature of the case, the lawyers would need to conduct extensive research, and would have many pretrial motions.

The judge settled at granting 15 days to submit pretrial motions.

The next hearing in the case will be held on May 25.