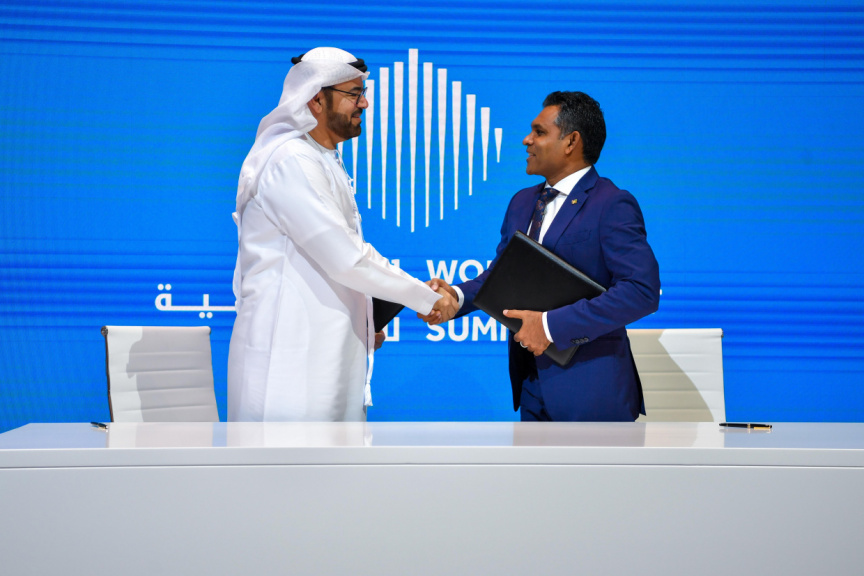 The governments of Maldives and the United Arab Emirates (UAE) on Tuesday signed a Memorandum of Understanding on experience exchange on government development and modernization.

The Maldivian government said that the agreement, signed on the sidelines of the World Government Summit 2022 in progress in the UAE, demonstrated a pivotal point of progress in the bilateral relationship between the two countries

Maldivian government said the MoU aimed to aid the Maldives in building institutional capacity and modernization of Maldives governance framework.

VP Faisal Naseem, along with Environment Minister Aminath Shauna, are in UAE to attend the 8th World Government Summit held at the Dubai Exhibition Center.

Shauna took part in the panel discussion, “Our Rising Blue Waters: Governments Combating Climate Change” alongside the President of Seychelles, Wavel Ramkalawan and Gaston Browne, the Prime Minister of Antigua and Barbuda.

The 8th edition of the two-day summit is hosted under the directives of Sheikh Mohammed bin Rashid Al Maktoum, Vice President, Prime Minister, and the Ruler of Dubai.

The World Government Summit 2022 brings together thought leaders, global experts and decision makers from around the world to share and contribute to the development of tools, policies, and models that are essential in shaping future governments.

The summit provides a unique platform to showcase and exchange best practices and smart solutions to challenges that nations face. It covers a wide network of leaders in the public and private sectors, and encourage them to think collectively and creatively about disruptive intersections between government and innovation, with the ultimate goal of promoting development and prosperity around the world.

The meeting was also attended by Shauna.

During the meetings, the government officials engaged in a broad discussion on ways to improve collaboration on environmental issues between the two countries.

Faisal also extended an invitation to the UAE Almheiri to visit Maldives.

Yameen: Will put forth PPM candidate for Kurendhoo seat