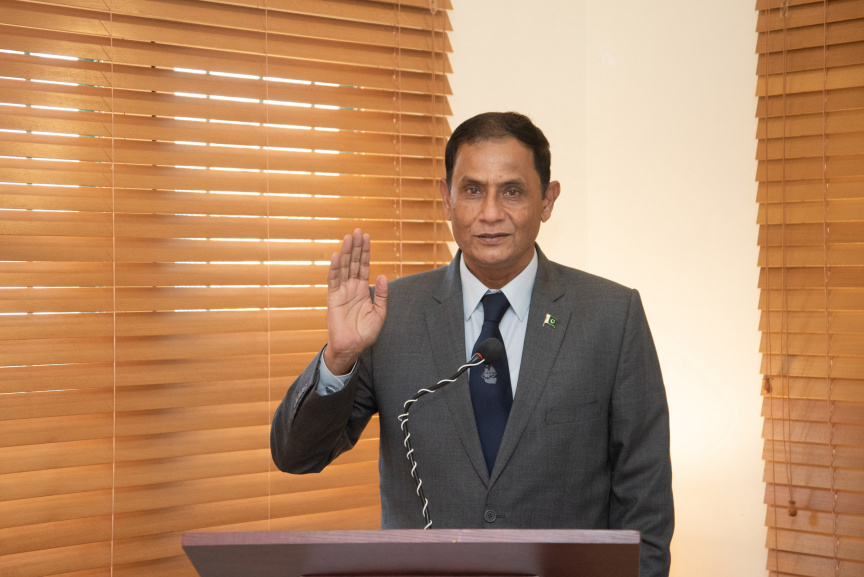 The Pakistan High Commission in Male’ states that Pakistan is confident the 48th Session of the Organization of Islamic Cooperation (OIC)’s Council of Foreign Ministers (CFM) - scheduled to be held in Islamabad later March – will prove to be a landmark session in the combined efforts of OIC’s member states to chart a joint Islamic way forward.

The 48th Session of the OIC-CFM is scheduled to be held in Islamabad on March 22-23.

As the second largest intergovernmental organization in the world, representing the collective aspirations of over 1.5 billion Muslims, the OIC has a pivotal role in advocating and advancing the interests of the Muslim Ummah.

The proposed theme of the 48th Session of the OIC-CFM, “Partnering for Unity, Justice and Development” fully encapsulates these priorities.

Pakistan High Commission said that as a founding member of the OIC, Pakistan was fully committed to the vision of realizing the potential of the organization as the most effective and representative voice of the Muslim Ummah.

“We will seek to build ‘partnerships’ across the Islamic world, and bridges of cooperation to address the myriad of challenges confronting the Ummah,” said the Pakistan High Commission.

The session will coincide with the 75th anniversary of Pakistan’s establishment in 1947.

The representatives of OIC member states who will attend the session have also been invited as guests of honor to attend the Pakistan Day Parade, on March 23.

“Pakistan remains deeply committed to the eternal Islamic virtues of amity and brotherhood. Promoting solidarity and cooperation between Members of the Islamic Ummah, is not only a foundational basis of our foreign policy, it is also an element of faith for us. The guiding principles of this vision were laid by the Father of the Nation, Quaid-e-Azam Muhammad Ali Jinnah, who described Pakistan’s policy towards the Islamic states as one of abiding ‘friendship and goodwill’,” said the Pakistan High Commission.

Speaking to media representatives during Thursday’s meeting, High Commissioner Mukhtar said that the Islamic Ummah was faced with a plethora of challenges, noting in particular the plight of Palestinians and Kashmiris, who he stressed continued to be deprived of their inalienable right to self-determination.

“The rising tide of Islamophobia and hate speech threatens Muslim communities across many parts of the world. Millions of our Afghan brethren confronts an uncertain future at the hands of hunger and disease. The deleterious impact of the COVID-19 pandemic is yet to be fully contained,” he said.

Zulqurnain mentioned that Pakistan had a proud history of hosting major OIC events including summits and CFM meetings.

“We hosted the 2nd OIC Summit in Lahore, in February 1974. An Extraordinary OIC Summit was held in Islamabad in 1997, on the occasion of Pakistan’s Golden Jubilee. Pakistan has also hosted the OIC CFMs on four occasions - 2nd Session in December 1970, 11th Session in May 1980, 21st Session in April 1993 and the 34th Session in May 2007. The 1st and the 17th Extraordinary Sessions of the OIC CFM, were held in Islamabad, in January 1980 and December 2021 respectively,” he said.

Pakistan High Commission said that Pakistan was confident the 48th Session of OIC-CFM would prove a landmark session in combined efforts to chart a joint Islamic way forward.

“On our part, Pakistan remains committed to support all efforts aimed at promoting unity, brotherhood and prosperity amongst the Muslim world,” said the Pakistan High Commission.

High Commissioner Mukhtar also spoke of the relations between Maldives and Pakistan, which he described as “very cordial”.

He said that Pakistan was working with the Maldives in various areas including education, health, sports, social sector and capacity building.