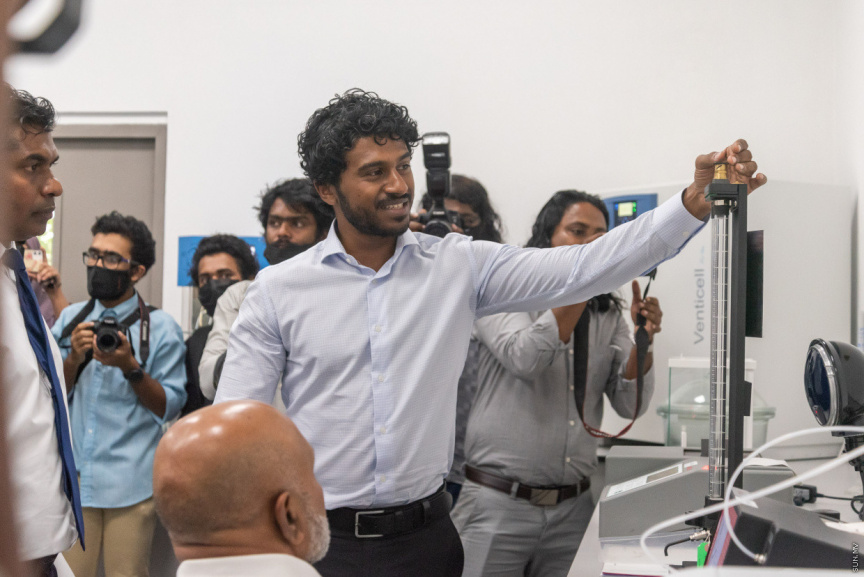 State Trading Organization (STO) has opened a fuel testing laboratory – the first such lab developed in the Maldives.

The lab was opened by STO’s Chairman Hamid Nasheed and Board member Aminath Rushma in a ceremony held at the STO Trade Center in Male’ City on Tuesday.

The lab will be operated by Geo-Chem Middle East – a top inspection and testing company headquartered in Dubai.

“We will be able to ascertain that the fuel imported into Maldives is suitable for use and environment friendly,” he said.

Many of the developed countries across the world have set standards for the fuel imported into the countries. Therefore, the fuel which do not meet the standards are often sold to countries that do not maintain standards.

Meanwhile, the fuel exported by countries hit with economic sanctions are available at a cheaper rate. However, such fuel is often contaminated.

Amr said that establishing fuel testing facilities in Maldives will ensure the maintenance of the standard of fuel imported into the country.

Geo-Chem's Director Pradeep Gopal said the lab will have ISO and ICC 1705:2017 accreditation, ensuring the credibility of tests conducted at the lab.

“For one thing, we currently bring in fuel every 10 days. We fill the five tanks currently at this airport and test the fuel in each tank separately,” he said.

Shamman said it takes three days to have the tests done from overseas.

However, with the new lab, MACL will be able to get immediate results.

Shamman said it will also save a huge expense.

“We currently send the samples via Emirates. And it's expensive, given jet fuel is categorized as a dangerous good,” he said.

“One of the biggest challenges we face is the inability to provide assurance on the quality of fuel to our customers, resorts, fishermen or boatowners,” he said.

Aman said that while fuel is tested at the port of import, no further tests can be done once the fuel is imported into Maldives.

He said that testing the fuel is therefore expensive, despite how much customers may want quality assurance.

Aman said being able to save the high air freight charges to send samples overseas for testing offers a huge relief.

Villa Hakatha’s Sales Manager Yameen Habeeb expressed similar sentiments. He said that the lab will provide customers assurance on the quality of fuel.

Geo-Chem has provided assurance it will offer testing services as at good rates, compared to international rates.