Shareef: I barely escaped traps Yameen set to have me arrested 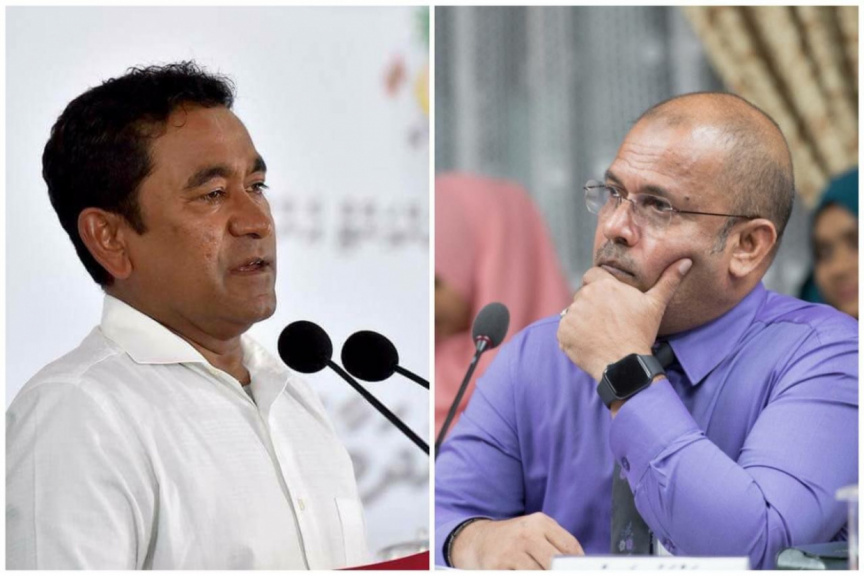 He made the statement in an interview to Sun regarding the challenges he faced in his political career.

Shareef said that he had been one of Yameen’s closest and most trusted friends until his appointment to the Elections Commission. He said that the bonds between them had remained strong until the 2018 presidential elections.

Shareef, who began working as a close aide to Yameen in 2016, had been involved in the People’s Alliance (PA), as well as the founding of the Progressive Party of Maldives (PPM).

He stopped his political work with Yameen after he was appointed a member of the Elections Commission on March 6, 2018. He was voted chairman of the commission the same day.

Shareef said that back then, he had been one of Yameen’s closest aides in his political work.

He said that he had been the one to implement many of Yameen’s plans, and one of the first to know his every move.

Shareef said the friendship between them turned sour the moment Yameen realized he had lost the elections.

He said that he became a target from that moment on.

Shareef said Yameen tried to bribe other Elections Commission members to turn them against him.

“Yameen tried hard to have me arrested. He tried to deposit money to the accounts of members. He pressured the members and offered bribes to have them testify against me. He did all that. I escaped from all the traps Yameen set by working very carefully,” he said.

Shareef said it only took a millisecond for the strong bond between them to fracture. He said that Yameen began a campaign to slander him and discredit him before the international community following the presidential elections.

Speaking regarding his role in the founding of PPM, Shareef described himself as the planner.

He also noted that he had been PPM’s first parliamentarian, after winning the by-election for the Thimarafushi seat in 2012.

“I played the most important role in the creation of PPM. Thinking we might face difficulties to create the party as it was during Nasheed’s administration, I, under the advisement of Yameen, joined Elections Commission as Secretary-General and completed work on registration of the party within the confines of the law,” he said.

Shareef said that he regretted that Yameen couldn't appreciate how he had been the very first parliamentarian from PPM.

“When we attempted to register the party in the Parliament, there wasn’t any parliamentarian elected as a candidate from the party. As it happened, the Thimarafushi seat fell vacant, and I was elected to the seat through PPM’s effort. I was the first parliamentarian to get elected [from PPM]. President Yameen was approved by the Parliament as parliamentary group leader with my signature, because I signed off on it,” he said.

Shareef said he repeatedly said as much to Yameen.

He described Yameen as a wise and intelligent politician. He said that Yameen knew he lost the elections, but refused to accept it for some reason.

“I also said during my time with the commission that I did not favor President Solih over President Yameen in order to have President Yameen lose or Ibu [President Ibrahim Mohamed Solih] win the elections. So Yameen worked deliberately to eliminate me. Therefore, given what he did, I have no intention of working with him again,” he said.

Shareef said that he was irrevocably linked with PPM’s history and Yameen’s political career, and that while he had no intention of working in politics with Yameen ever again, he did not wish him any harm.

LCE will not be announced without equal campaigning