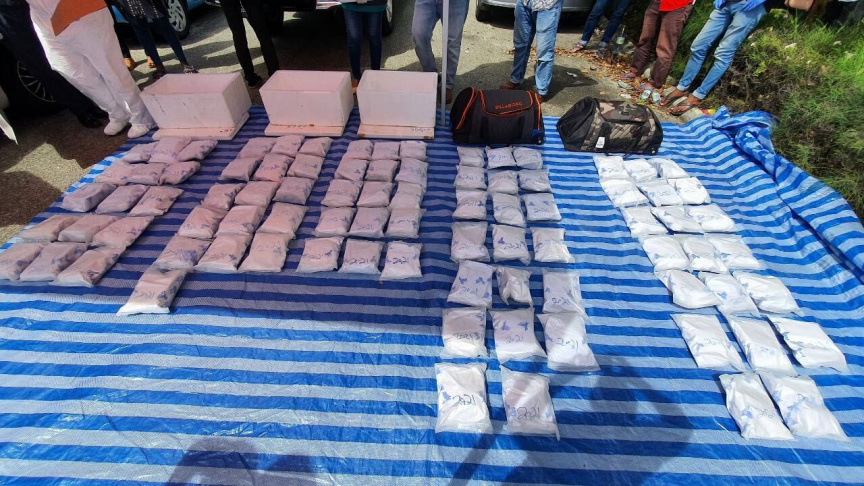 Drugs seized by police in a counter-narcotics operation in greater Male' area in December, 2021. (Photo/Mohamed Hameed, Commissioner of Police)

Police have recovered additional packets of drugs in a counter-narcotics operation in the Maldivian capital – linked with the drugs found in the trunk of a taxi earlier this week.

In a tweet on Tuesday morning, Commissioner of Police Mohamed Hameed said police had successfully recovered additional 91 packets of drugs during the last 48 hours.

The drugs are suspected to be heroin, he said.

Hameed said that the police have now found total 119 packets of drugs in the case.

The estimated weight of the drugs seized in the operation is 119 kilograms, he said.

The drugs seized on Sunday were found in a large suitcase in the trunk of a taxi at the intersection of Maafaiythakurufaanu Magu and Buruzu Magu.

Police confirmed the Drug Enforcement Department (DED) conducted a counter-narcotics operation in Male’ City, but did not release any details.

It is unclear if any arrests were made.

The operation this week comes after the police seized large quantities of heroin two operations in October.

In the first operation, police searched multiple uninhabited islands, locations in Male’ City and Hulhumale’, and a liveaboard vessel and a speedboat, and found over 100 kilograms of heroin hidden in Bodukaashihura, an uninhabited island located in ADh. Atoll, on October 13.

Police originally arrested 10 suspects in connection to the case. However, only two remain in custody.

The two suspects arrested in the case have been ordered to jail pending the outcome of their trial.