Ooredoo to connect Kulhudhuffushi with Singapore and Europe via submarine cable 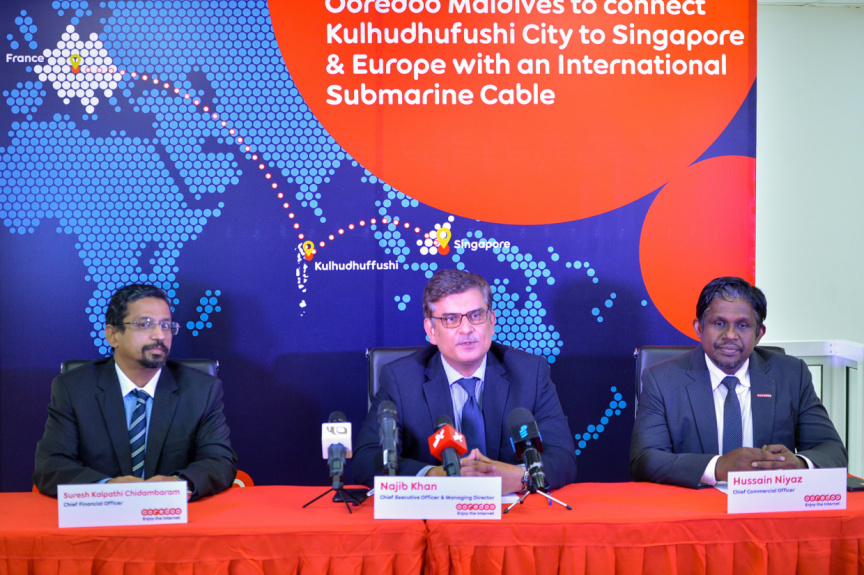 A capture from the press conference held by Ooredoo Maldives to announce its investment in the PEACE Cable to link Kulhudhuffushi City with Singapore and Europe on December 13, 2021. (Sun Photo/Mohamed Hayyan)

Ooredoo Maldives has announced its plans to connect Kulhudhuffushi City with Singapore and European countries via the PEACE Cable.

The telecommunication company, on Monday, announced that they have entered into an agreement to invest in the PEACE Cable – set to land in Kulhdhuffushi City.

A PEACE Cable is a direct international Submarine Cable System that will build resiliency, diversity and redundancy on international data capacity to provide uninterrupted services to customers. Ooredoo said that the cable will further solidify the digital infrastructure of Maldives.

In this regard, the new international submarine cable will cover approximately 3000 kilometers to the east and 6000 kilometers to the west – connecting Maldives to Singapore on the east side and Marseille, France on the west side. The west side will be linked through a trunk route – meaning it will also connect more than 15 countries, including that of in East Africa.

Ooredoo detailed that Kulhudhuffushi City was carefully chosen to be the host landing station of this subsea cable to create diversity in ISP traffic and to develop other areas besides the capital to drive a digitally powered nation.

They further added that the purpose of investing in the revolutionary submarine cable is to improve latency to Singapore and Europe – as well as to add more capacity. Furthermore, it will also provide diversity to international traffic and empower the 5G capabilities in line with the telecom company’s vision to establish a truly ‘digital Maldives’.

Speaking at the event held today to announce the investment in the PEACE Cable, Ooredoo Maldives’ CEO, Managing Director Najib Khan said that the rapid use of the internet has significantly increased the dependency on it – calling for the digital infrastructure to be further strengthened.

“The rapid use of the internet, cloud services and other future digital services enabled by 5G network and the Internet of Things has greatly increased the dependency and importance of strengthening the infrastructure. Ooredoo Maldives will ensure we are at the helm of the digital transformation of the nation through investments to strengthen the digital infrastructure to support the growing need of local communities and businesses to realize the benefits of digital age,” he had said.

With the PEACE Cable in Kulhudhuffushi City – it will become the first island outside from the Greater Male’ Area to be connected to digitally advanced countries through an international submarine cable.

Commenting on this, Kulhdhuffushi City Mayor Mohamed Athif said that is the project will surely improve the overall connectivity across the nation and that Kulhudhuffushi residents are eagerly waiting for the development and opportunities it will bring them.

“We are extremely excited and grateful for this first of its kind initiative by Ooredoo Maldives. With the landing of this subsea cable Kulhudhufushi City will be the first island outside the greater Male’ to be connected to digitally advanced countries through an international submarine cable. This project will massively improve the overall connectivity across the nation and connect our communities to new digital heights. We look forward to the future developments and opportunities this will bring the people of the North We extend our humble gratitude to Ooredoo Maldives for choosing Kulhudhufushi City to host the landing station of this new international submarine cable,” he had said.

Ooredoo said that the PEACE Cable is estimated to be deployed and land at Kulhudhuffishi in early 2023.