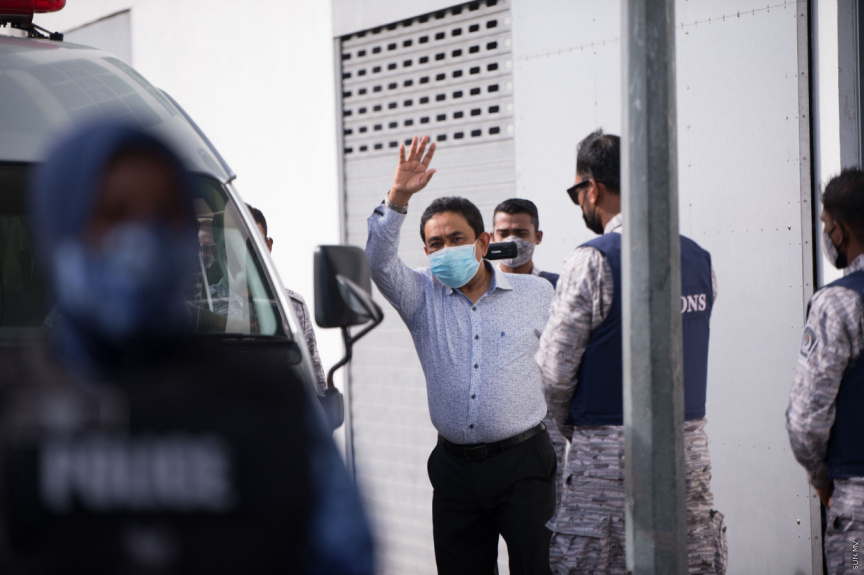 Opposition leaders and supporters gathered outside the PPM headquarters and Yameen’s residence – located close to the headquarters for celebrations following the judgement; a decision they described as “victory for truth and justice”.

Yameen’s acquittal was also welcomed by MDP members, who reiterated that the takeaway from today is the result of President Ibrahim Mohamed Solih’s efforts to ensure the independence of the judiciary.

As many individuals who supports the government, Heritage Minister Yumna Maumoon said that today, the Maldives is reliving the memories of day that the roof tins of the Supreme Court’s roof were removed, after which Justices were arrested during Yameen’s administration.

in this regard, Minister Yumna said that it has been proven today that this government will not arrest justices after removing the roof tins.

“This government will not arrest Justices. Will not remove roof tins,” she had said.

Renowned lawyer, Fonadhoo MP Moosa Siraj commented that the Court’s judgement was very clear, and that it indicates that a ruling won’t be made in bias against justice, just because the person is a political figure.

Siraj further added that the judgement insinuates that investigative bodies need to be more competent, especially when pressing charges.

JP’s Spokesperson, Environment Ministry’s State Minister Ali Solih had thanked President Ibrahim Mohamed Solih and the government for the efforts to guarantee the independence of the judiciary.

“This is President Ibrahim Mohamed Solih’s justness. That he does not touch the courts. He has secured a place in the people's hearts,” he had said.

During Yameen’s administration, a state of emergency of five days was announced on February 5, 2018, triggered by the Supreme Court’s order to release all political detainees and the decision to overturn Elections Commission’s decision declaring that 12 parliamentarians had lost their seats – issued on February 1, 2018.

A lot of those who were working in the legal field back then had strongly criticized Supreme Court’s decision, describing it as in violations of the laws. They said that they had lost trust in the judiciary following this.

Whilst the opposition coalition celebrates Yameen being freed after 732 days – supporters of the government is describing today’s events as a lesson to learn from.

Govt. to bring in two electric minibuses for Male’