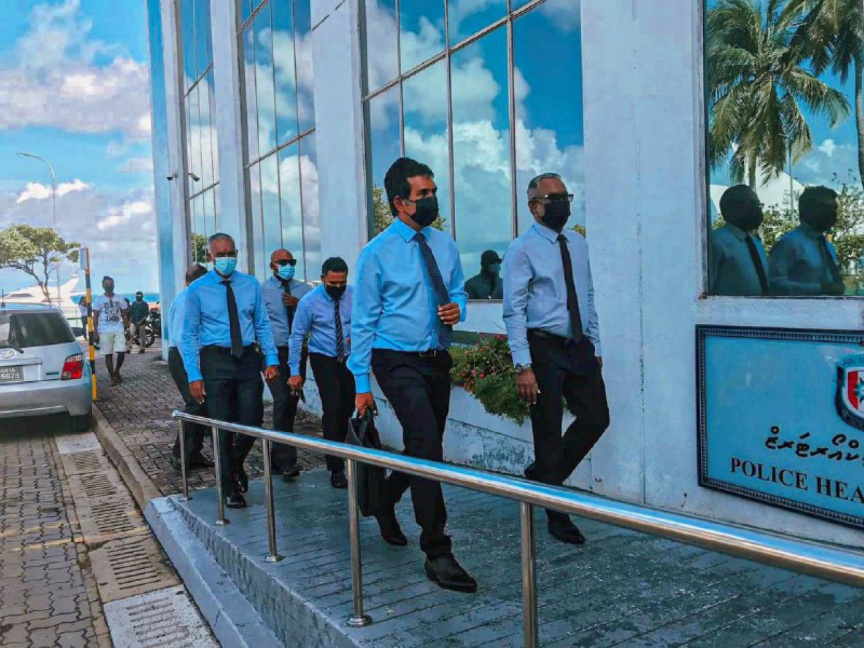 The opposition coalition, composed of PPM and PNC, has stated that the Judicial Service Commission (JSC) is incapable of investigating the alleged audio recordings of three judges; known for their collective sentencing of former President Yameen Abdull Gayoom.

The leaders of the opposition coalition visited the HQ of the Maldives Police today to discuss their concerns regarding the audio recordings.

While speaking to the press after the meeting, PNC leader, Abdul Raheem Abdullah (Adhurey) said that the reason for the visit is to check the status of the ongoing investigation because they believe the authenticity of the recording is yet to be determined. He further added that the he intended to meet Commissioner of Police Mohamed Hameed to discuss the opposition’s campaign “India Out”, but was unable to do so because he was in India.

He shared that various letters that were sent requesting a meeting with the CP but all were left unanswered.

“As JSC is almost nearing a verdict, we have been saying multiple times, that, if a verdict is announced prior to knowing the truth of the audio recordings it would be a tremendous injustice,” Adhurey said.

Criticizing the investigation, he said he was unable to understand why one judge’s voice was confirmed as a match while the other twos’ were not.

"JSI is not qualified to investigate this case. Police had said that they have hired a freelancer to further investigate the audio recording. On the last day we met, the police said that the investigation is not complete yet because there is a technical issue and that 10 more days are required," Adhurey shared to the press.

According to JSI's audio analysis, the audio of Criminal court judge Hussain Faiz Rashad was confirmed a match. Due to this, he is currently suspended.