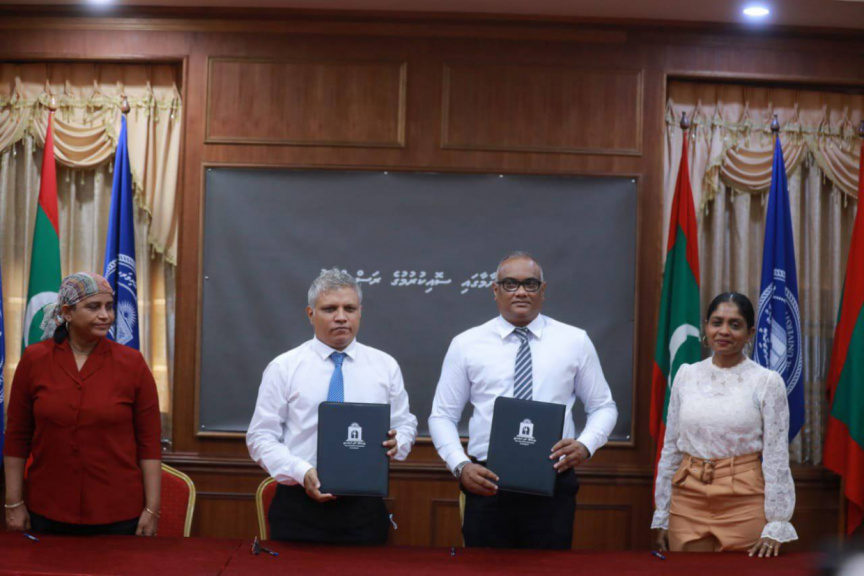 Maldives National University (MNU) and Island Aviation Services Ltd. have signed a Memorandum of Understanding (MoU) on the creation of a joint venture company to run the new flying school in Addu City.

Speaking at the company, Mihaad said that the new flying school will train personnel for various fields in aviation in addition to training just pilots – and see them integrated into the working environment.

Haleem who also spoke at the ceremony said that classes will commence at the new flying school by the end of this year – adding that they would be selecting 30 students for the first batch.

In addition to this – Haleem noted 80 students per year will be given the chance to enroll at the school per year. He also noted that when selecting students – priority will be given to students who have already commenced flight training, however, have been unable to finish the course.

Haleem also said that as the number of students studying at the school increase – the school’s training programs will be extended to additional airports of Island Aviation.

In 2009 – Sri Lanka’s Asian Academy of Aeronautics (AAA) was contracted to run the flying school in Addu City. Subsequent to bad management resulting in the studies of the students being adversely impacted – the government had terminated the permit given to AAA’s Training Head Suranjan Di Silva.

Following this, President Ibrahim Mohamed Solih had assured that classes at the flying school will resume in December. He also announced the decision to offer top-up loans for students to financially assist them.

Island Aviation said that the flying school will be then be managed by a flight academy from Czech Republic - who is on board with the joint venture.

MNU to hold Theveli 2023 in August

MNU to hold walk to mark 50th anniversary of tourism