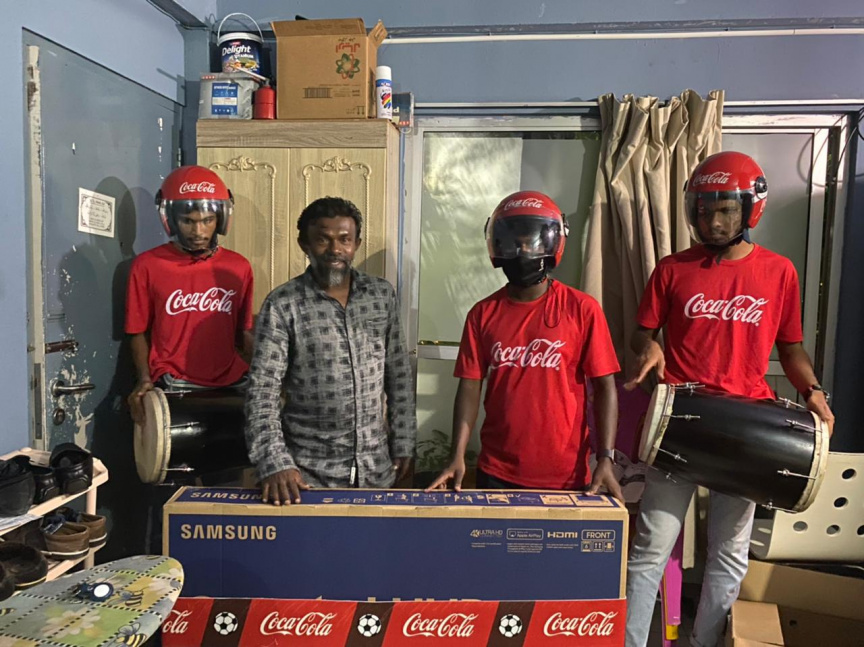 Coca-Cola hands over prizes to winners of the 'Coke, Food & Football' campaign. (Photo/Coca-Cola)

Coca-Cola has handed over prizes to the lucky winners of the first draw of the ‘Coke, Food & Football’ campaign in Maldives.

The ‘Coke, Food & Football’ promotion has been running since August 15.

The winners of the first draw of the promotion were Aishath Naaifa, Hussain Riyaz, Faheema Gasim and Fathmath Rasheed. They have been awarded a smart phone, a 50” smart TV, and Coca-Cola branded mini fridges.

Customers can take part in the promotion by purchasing the 300ml, 500ml, 1.25 liter and 2 liter PET bottles of Coca-Cola.

To participate, customers have to SMS the unique code under the special golden cap of their Coca-Cola bottles to 2626. If the code is chosen in the lucky draw, the customer needs to present the golden cap and claim the prize.

Coca-Cola states customers have the chance to win more prizes every single day until September 30.

Coca-Cola is one of the world’s most famous and best-loved brands and has been refreshing the world for 135 years. The Coca-Cola Company, through its bottling partner, Maldives Aerated Water Company, has introduced a range of hydrating and delicious beverages to Maldives. The Coca-Cola brand has also sought to brighten consumers’ lives through a variety of engaging projects and activities.

Sprite's 'Drink It & Bin It' campaign for Maldives