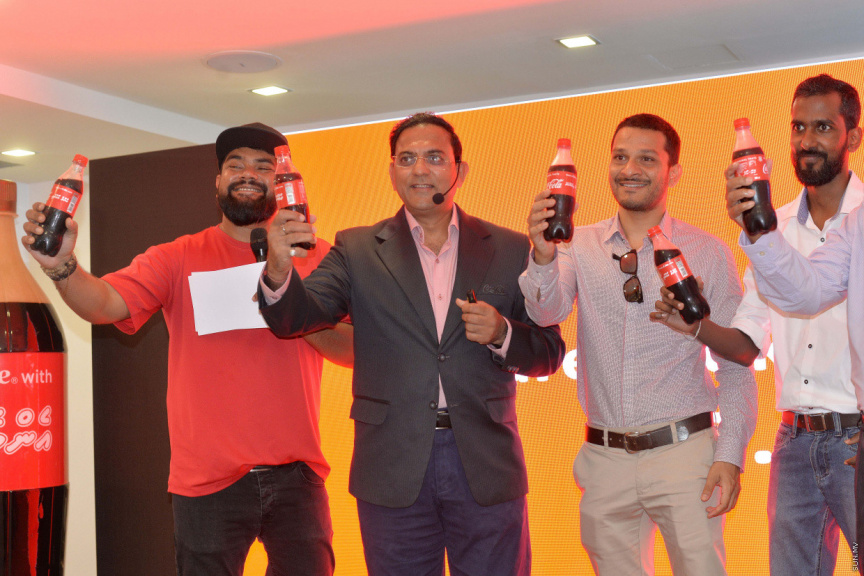 Coca Cola commences a new Share a Coke campaign with Dhivehi taglines such as "Salhi Meeha" and "Habeys" on October 27, 2019. (Sun Photo/Fayaz Moosa)

The Coca Cola company has kicked off a campaign with Dhivehi taglines on bottles to maintain the popularity of the beverage in the Maldives.

At a ceremony held in Salt café, the campaign was kicked off with eight different taglines. The taglines include “Salhi Meehaa”, “Emme Hiyvarugadha”, “Emme Loabivaa” and “Habeys” which is hoped to be a hit with consumers by the Coca Cola company.

The campaign had also been carried out in other countries with the names of famous movies or songs on the bottles. Coca Cola company Country Manager for the Maldives and Sri Lanka Pankaj Sinha noted that the campaign had attracted a lot of popularity in the Maldives in the one year since its introduction.

“The first stock was emptied in one and half months,” commented Sinha.

The campaign this time is so that it can be gifted to a close one to match their personality. Share a Coke campaign is one the Coca Cola companies’ most successful campaigns and the campaign that started in Australia in 2011 has now expanded to numerous countries.