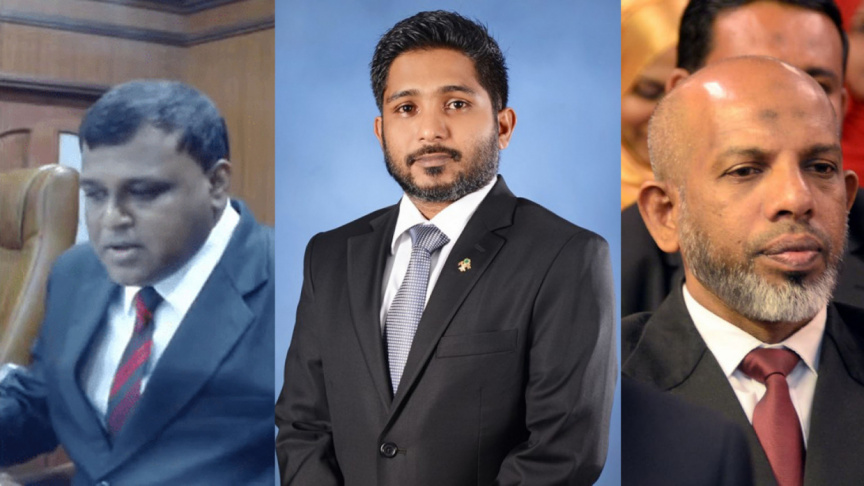 The three judges on the Criminal Court bench which convicted former Maldivian President Abdulla Yameen Abdul Gayoom of money laundering in 2019 told the Judicial Service Commission (JSC) on Monday that the alleged audio recordings of them suggesting the sentence was influenced were fake.

Yameen’s trial was originally assigned to then-chief judge Ahmed Hailam, but he was suspended at the last minute and a five-judge bench was established to hear the case. The bench was composed of Judge Hussain Faiz Rashad, Judge Ali Rasheed Hussain, Judge Mohamed Sameer, Judge Ahmed Shakeel, and Judge Ali Adam.

Alleged audio recordings of conversations by three of the judges - Hussain Faiz Rashad, Ali Adam, and Mohamed Sameer - went viral on Sunday, in which they make comments suggesting the trial was influenced.

JSC, which has opened an investigation into the audio recordings, questioned all five judges on Monday.

According to a statement released by JSC on Monday evening, the three judges, when questioned, said that the audio recordings were fake and that they did not make such comments.

The other two judges also denied the allegations made in the audio recordings.

JSC said that it has asked the police to conduct an analysis of the viral audio recordings, and that the judges have agreed to provide voice samples for the analysis.

JSC has stated that any allegations of interference and influence over the work of judges will therefore be investigated as a special priority.

The issue of the audio recordings sparked heated exchanges at the Parliament earlier this Monday, forcing the suspension of the sitting. Opposition parliamentarians later went to the President’s Office to demand answers.