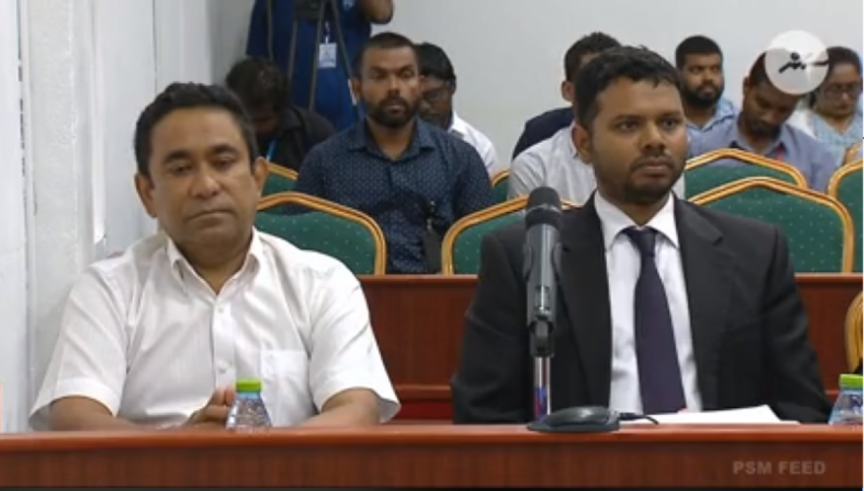 Former President Abdulla Yameen during the sentencing hearing of the money laundering case against him held on November 28, 2019.

Yameen was charged with money laundering based on an USD 1 million transfer from SOF Private Limited – the company accused of laundering money embezzled from MMPRC - to one of his personal bank accounts.

The State alleged the USD 1 million had been the acquisition cost due to MMPRC for the lease of G. A. Vodamula. He was accused of laundering the money and attempting to hide its origins.

The Criminal Court issued its sentence in the case this Thursday afternoon.

He was found guilty of money laundering with the unanimous consensus of the bench of five judges who oversaw the trial.

He has been sentenced to five years in prison, and fined USD 5 million.

Acting Chief Judge of Criminal Court, Ali Rasheed, who read the bench’s verdict, said that the money transactions as well as the testimony of the State’s witnesses established two elements of the crime of money laundering; criminal act and criminal intent.

He also said that while the defense had petitioned to exclude the testimonies of State’s witnesses former Vice President Ahmed Adeeb Abdul Gafoor and former MMPRC Managing Director Abdulla Ziyath, the bench decided to against excluding their testimonies due to other evidence which support their testimonies.

He said the bench reached its unanimous verdict following 10 days of deliberations.

The verdict was met with protests by the crowd of the former president’s supporters gathered outside the courthouse.