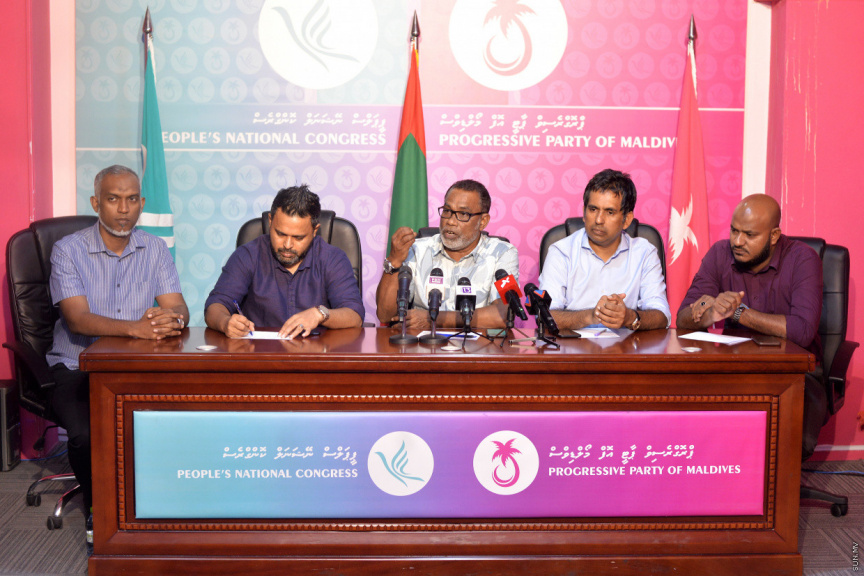 In an appearance on SanguTV last Monday, Nazim, who now serves as parliamentary representative for Dhangethi constituency, said that the pistol, three bullets and magazine found in a bag in his residence had been a frame job to ruin his political career. He also alleged that Yameen had been involved in framing him.

Nazim also said that according to regulations, a defense minister may sign out weapons from the MNDF armory, and could therefore take out any weapon any time.

He said that the public therefore must not believe he would hide a weapon under his pillow, or that a defense minister would hide a pistol and explosives in a cupboard.

The opposition coalition, in a statement on Wednesday, condemned Nazim’s statements.

The opposition denied any link between the 2015 case with Yameen, and also said that Maldivian regulations do not allow for a defense minister to sign out weapons from the armory at will, as Nazim claimed.

“Though he claimed the case of the weapons found in his residence was orchestrated by then-President and PPM leader Abdulla Yameen Abdul Gayoom and happened with his knowledge, we hereby clarify that President Yameen gained knowledge of it after the weapons were found,” said the opposition coalition in its statement.

The opposition coalition said it therefore condemns the “false and unfounded statements” regarding Yameen in the harshest of terms.

“We also express concern that his statements regarding Maldivian regulations on possession of weapons by ministers were false, and call on Colonel (Retired) Mohamed Nazim to reveal the truth of the matter, without any misleading, to the Maldivian people,” said the opposition coalition.

The opposition coalition said that spreading lies and strife isn’t the way to form a political party – in reference to the move by Nazim to form Maldives National Party (MNP).

Nazim, in his interview to SanguTV, maintained that the weapons had been planted in his residence, and that he continues to call for a proper investigation and justice in the case.

“That was specifically planned and carried out by some people to frame me. I have to say to this day that it was carried out under a plan by then-President, Police Commissioner and Tourism Minister,” he said.

Nazim said that no one can enter the residence of a defense minister without the knowledge of the President and Police commissioner. And said that it had been a frame job orchestrated by Yameen, even if he refuses to publicly acknowledge it.

Nazim had been sentenced to 11 years in prison for smuggling and possession of a firearm by the Criminal Court in March 2015. The sentence was upheld upon appeal by the High Court, but later overturned by the Supreme Court in 2018, citing lack of sufficient evidence linking the weapons to Nazim.