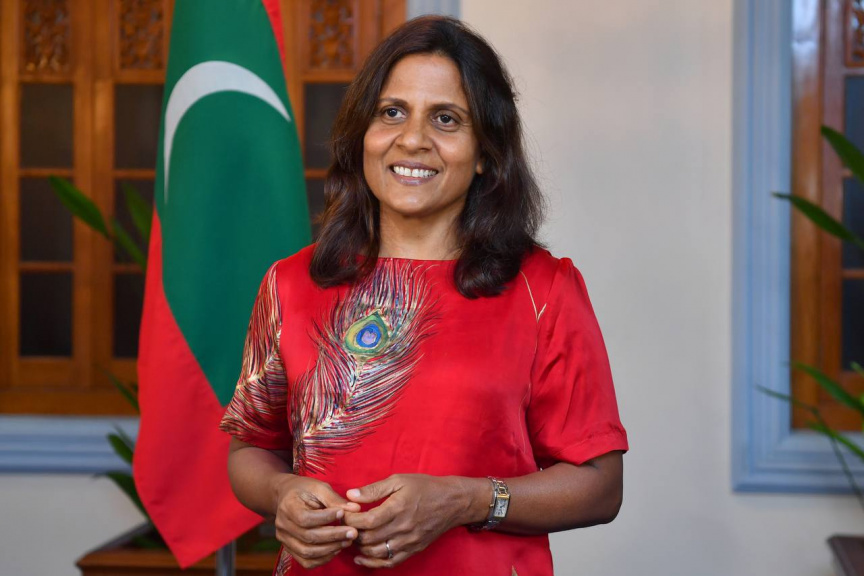 The First Lady of the Maldives Fazna Ahmed. (Photo/President's Office)

Fazna made this statement in a video message broadcasted yesterday evening as part of the season finale episode of the ‘Geveshi Gulhun Saasthura’ series conducted by the Ministry of Gender, Family and Social Services in association with United Nations Population Fund (UNFPA).

In this message, Fazna noted that the manner in which mainstream media portray household issues may create a negative ambiance. Thus, she stressed the importance of including hopeful messages in mainstream media commercials to sway public perception towards more positive attitudes, behaviors and beliefs.

She also encouraged the community to be respectful when communicating with each other and also called on them to show love and respect towards parents.

She further explained that treating parents and elders with compassion would inspire our children to follow the same path, as positive change can only be brought forth by nurturing confidence and optimism.

Fazna also noted that one of her biggest takeaways from the series is the importance of establishing good family relations to avoid domestic violence. In line with this pointed out the importance of both genders knowing how to effectively solve family issues that arise.

In concluding her message, Fazna highlighted ways to provide support for victims of domestic violence. Accordingly, she noted that the victim support hotline of the Gender Ministry provides all the necessary information needed for a comprehensive range of issues.

“For example, which form must be filled with if the spouse refuses to pay child support. The procedures used by the police and hospitals on sexual assault and rape cases – what forms need to be filled in such a case. According to experts, assuring that such information is disseminated and establishing a strong support system for victims increases the chances of them asserting power over such situations,” she added.

Additionally, Fazna also noted that collaborative effort by island councils and NGOs is necessary for this mechanism to function efficiently.