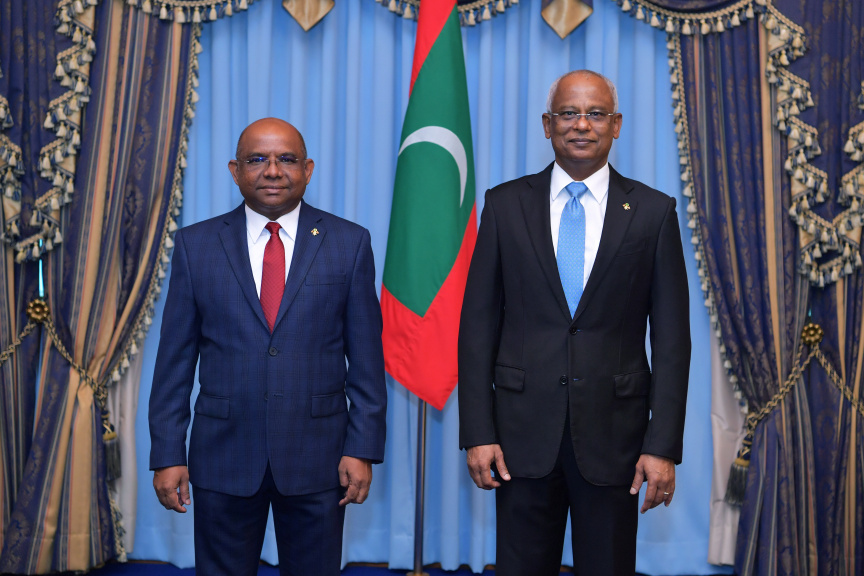 President Ibrahim Mohamed Solih said on Tuesday that the election of Maldivian Foreign Minister Abdulla Shahid as the President of the 76th Session of the United Nations General Assembly (UNGA) is proof the Maldivian government’s ongoing work in diplomacy has gained recognition from the global community.

He made the comment in a meeting with Shahid at the President’s Office on Tuesday afternoon.

At the meeting, President Solih congratulated Shahid on his landslide election victory and described it as a proud achievement for Maldives.

He said that it also served as global recognition for the Maldivian government’s diplomatic efforts.

President Solih said he believes Shahid’s election as the President of the 76th UNGA is a step forward in elevating Maldives’ stature on the global stage, and that he is hopeful it will bring more success to the country.

He also expressed confidence in Shahid and his future undertakings as the President of the 76th UNGA and extended well wishes for his upcoming new role.

Shahid also commended President Solih’s efforts to revive and improve Maldives’ relations with the global community, and described it as one of the most significant wins in diplomacy since Maldives attained independence in 1965.

Shahid became the President of the 76th UNGA during the election held at the UN headquarters in New York on June 7.

Shahid’s election marks the first time Maldives will be occupying office of the President of UNGA.

He will assume office on September 14.

'Police have regained public’s trust in this govt.'