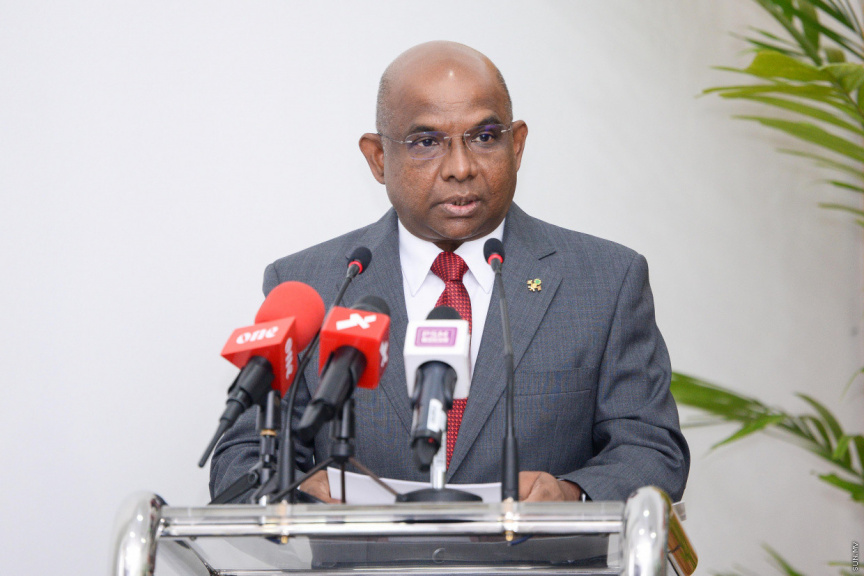 Foreign Minister of the Maldives Abdulla Shahid has been elected to the President of the 76th UN General Assembly.

In the election held at the UN General Assembly meeting at 19:00 local time tonight, Minister Shahid ran against the former Foreign Minister of Afghanistan Zalmai Rassoul​.

Minister Shahid won 191 votes while his opponent won 48 votes from a total of 191 votes.

Minister Shahid will officially take his place as the President of the 76th General Assembly in September later this year.

President Ibrahim Mohamed Solih was amongst the first to congratulate the Foreign Minister.

The President tweeted that it was a great honour for the Maldives and there were no doubts that Minister Shahid make his nation proud as the President of the General Assembly, after congratulating the Minister.

Minister Shahid, speaking in the General Assembly sitting tonight as the President-elect, said that the win was a massive victory for the Maldives and showed that the entire world had faith in the Maldives and accepted the country.

"It goes to prove that, the world is supporting the Presidency of President Ibrahim Mohamed Solih. The President's foreign policy is accepted by the world," said Minister Shahid as he was addressing the Maldivian diplomats in Dhivehi at the assembly.

This is the first time an official from the Maldives has been elected to such a high-ranking position of the United Nations. Maldives will be the sixth nation from SAARC to preside over the General Assembly. Only the Maldives and Nepal had not served in the position so far.

Minister Shahid, in his address also thanked the nations which supported the Maldives in its bid for the General Assembly Presidency saying that a number of challenges waited as the UN commences the 76th term.

The Minister said that last year, was one of hopelessness and despair, plagued with disease and violence, and dangers to the environment, world, and the seas.

The Minister said that the 76th session would specifically be focused on the natural environment and conferences such as the COP26 on Climate Change, The Ocean Conference, M Biodiversity and COP15 on Diversification, The Energy Dialogue, Conference on Sustainable Transport and Food Systems would be held.

He also said that it was important to listen to the public and discuss concerns, while respecting the rights of everyone, and considering the feelings of everyone while providing humanitarian assistance without a break.

The Minister also stressed amplifying the voice of youths and paving the way for more opportunities for youths. He said that advocating for gender equality and terminating such inequalities would also be a focus of his. He said that he would not take part in a panel where gender inequality existed.

The Minister further said that the UN needed to be a stronger place for the current needs of the world and work in a transparent and responsible manner.

The Minister said that the ties between different UN bodies need to be made stronger and new ways of expanding the work of the UN, in a manner to accommodate this, needed to be discovered.

"I have met with senior officials from 193 countries in the last few weeks and explained to them my vision. I also asked for their ideas, and answered their questions," said the Minister after stating that he would work to unite and involve every nation, in a transparent manner during his term in office.