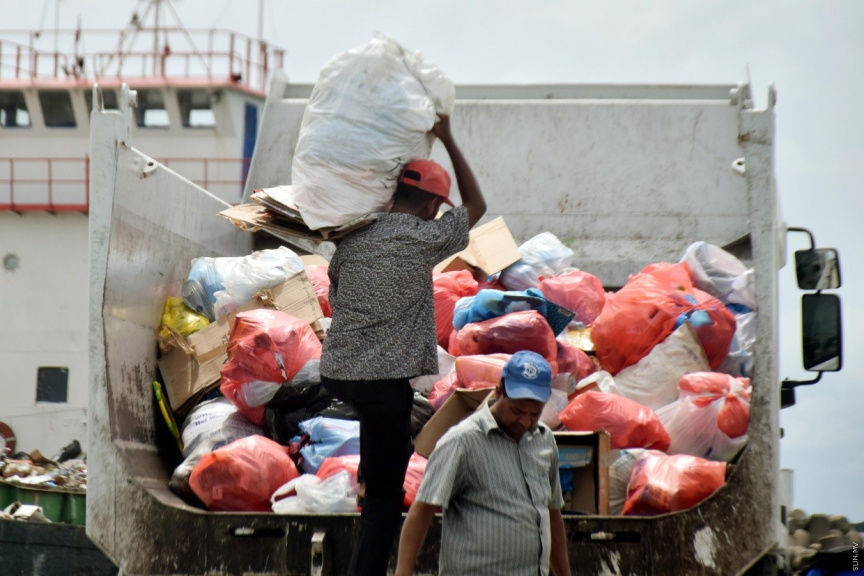 A worker transporting waste onto a truck near WAMCO site. (Sun Photo/Fayaz Moosa)

The China State Construction and Engineering Corporation (CSCEC) has been awarded a project to establish a waste transfer station in the Greater Male' Area of Male' City and Vilimale'.

Minister Shauna, during the signing ceremony, said that the establishment of the station would mean that waste could be packed inside containers before being taken to Thilafushi for disposal, reducing the risk of leakage into the ocean.

A permanent solution would also be attained regarding odors originating from waste when separated into containers whereby specific containers would be used for construction waste. When the waste separation procedures are in place, wet and other types of waste would also be separated, resulting in better hygiene in waste disposal locations.

The agreement signed with CSCEC is for USD 600,000. The project will be run under phase 1 of the Greater Male' Environment Improvement and Waste Management project conducted by the Environment Ministry with the assistance of the Asian Development Bank (ADB), JFPRR, TSAF.

The project is to be completed within a period of one year and four months.