May 6 blast: Police arrest 2, key suspect remains on the loose 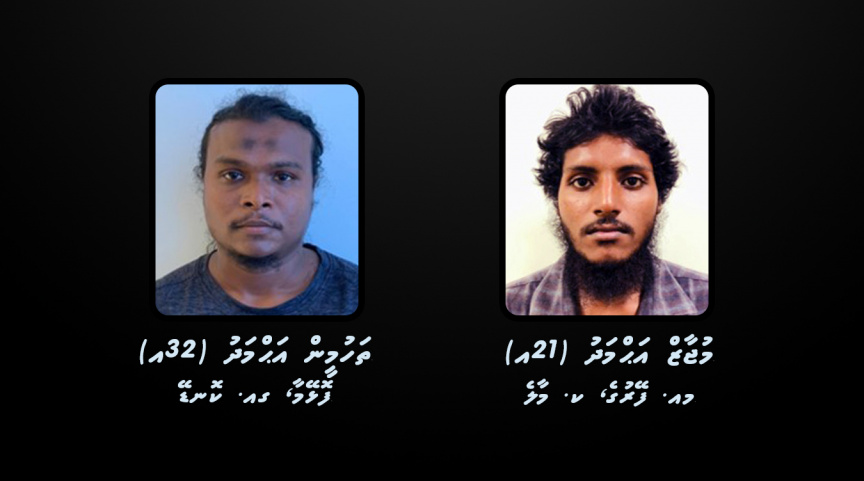 Maldives Police Service has released the identities of two suspects arrested for involvement in Thursday’s targeted terror attack to assassinate Parliament Speaker, former President Mohamed Nasheed, as the main suspect - the man who detonated the IED - remains on the loose.

A homemade remote-controlled IED was strapped to motorcycle parked nearby Nasheed’s residence, and was detonated just as Nasheed, 53, exited his residence and went to get in his car. Nasheed was thrown to the ground and sustained multiple shrapnel wounds, while three members of his security detail and two bystanders sustained minor wounds.

The identities of two suspects arrested in connection to the case were released by the police in a press conference on Saturday afternoon.

And of the two suspects, Mujaz is suspected of being directly linked with the person who detonated the IED. While Thahmeen is the owner of the motorcycle to which the IED was strapped. The motorcycle had a fake license plate, and attempts were made to obliterate the engine identification number, but the police forensic team restored the number - leading to Thahmeen's arrest.

Sun is able to confirm the motorcycle was never reported stolen.

Commissioner of Police Mohamed Hameed said the two suspects arrested in the case belonged to a dangerous extremist ideology and would not hesitate to kill.

He said that the police, however, have yet to establish which extremist ideology they follow.

Prosecutor General Hussain Shameem said that the evidence collected in the case so far, both disclosed and undisclosed to the public, reveal links with extremism, but that the police are also pursuing other angles.

The police said on Friday they are pursing four persons of interest whose behavior at the scene of the explosion was found to be suspicious.

The police have released three images taken from CCTV footage of the prime suspect in the case - the man captured on CCTV footage at the Athama Palace, in direct view of Nasheed's home street when the explosion took place. The police believe him to be the person who detonated the IED and have asked for public assistance to establish his identity.

The police have released CCTV footage of the explosion, which shows Nasheed walking from exiting his residence in the narrow Neeloafaru Hingun and walking to the car parked in Majeedhee Magu, surrounded by his security. The blast takes place just as he reaches the motorcycle the IED was strapped to.