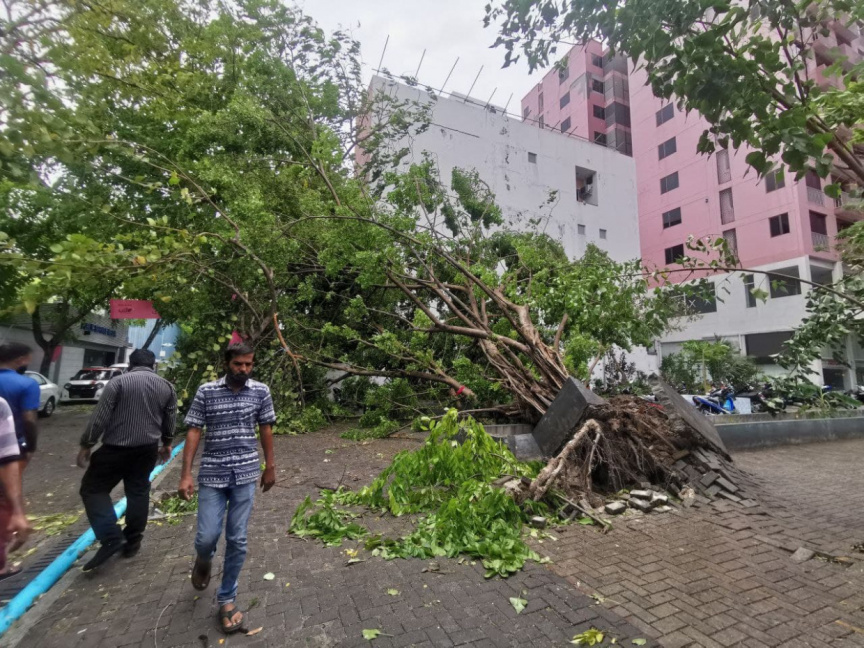 Strong winds topple over a tree near the Gaakoshi flats in Male' City on March 29, 2021. (Sun Photo/Fayaz Moosa)

Strong winds uprooted a large tree in the vacant space near the Gaakoshi flats, along with several trees in Ameenee Magu.

Branches from trees lay scattered on roads such as Sosun Magu.

Maldives Meteorological Service has issued yellow alert for regions from B. Atoll to Addu City, forecasting torrential rain, thunderstorms with strong winds of 25 - 30 mph, gusting to 55 mph and rough seas. The yellow alert is in effect from 10:00 am to 02:00 pm.

Taxi drivers report the strong winds are making it dangerous to travel on the Sinamale’ Bridge which connects Male’ City with suburban Hulhumale’ and Hulhule’ – where the Velana International Airport is situated.

They are also facing difficulties due to blockage of roads due to fallen trees.

A captain of a ferry which travels between Male’ and Hulhule’ said boats are also facing difficulties travelling due to strong winds and rough seas.