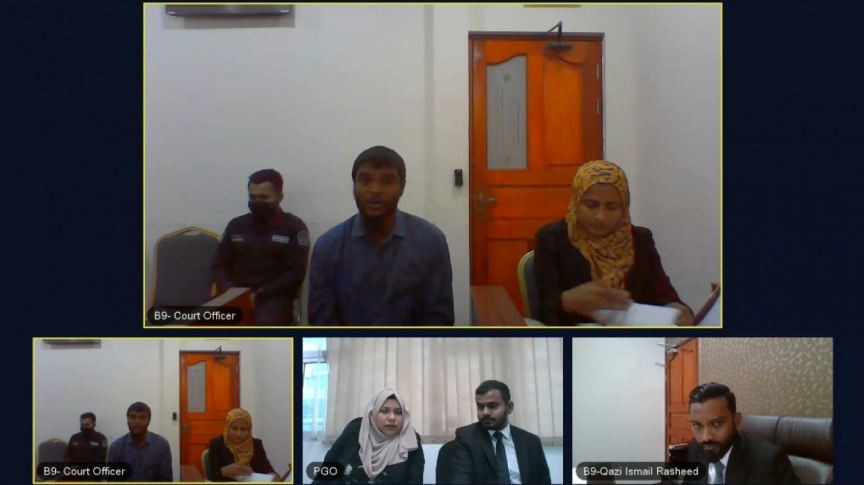 Adhuham Mohamed (top C) speaks during a hearing at Criminal Court on February 25, 2021.

Claiming the killing of 59-year-old taxi driver Qasim Hassan wasn’t intentional, the man charged with his murder – 22-year-old Adhuham Mohamed has provided his own detailed account to the court.

Qasim was found dead with knife wounds on his neck and hands in a road in suburban Hulhumale’ on the night of December 4, 2019.

The State alleges Adhuham killed Qasim during a robbery, and has charged him with murder with intent using a sharp-edged weapon. Adhuham confessed to the murder during his arraignment at the Criminal Court under a plea deal with the State on February 12, 2020, but later retracted the confession, claiming he was tortured by the police into making a false confession.

This led to the dissolution of his earlier plea deal with the State.

Criminal Court Judge Ismail Rasheed granted a motion by the State to keep some of their witnesses anonymous and began the murder trial this Thursday.

Adhuham confessed that Qasim died by his hands again on Thursday, but denied the killing had been intentional.

He said that he had been under the influence of drugs at the time, pleaded for forgiveness from Qasim’s family, and asked for a lesser sentence.

Following his statement, Judge Ismail Rasheed asked Adhuham to provide a detailed account of the events of the night he killed Qasim.

Adhuham asked Qasim to take him to the halfway house for recovering drug addicts in Hulhumale’. Once they entered Hulhumale’, Adhuham brandished the knife in front of Qasim and began threatening him.

Adhuham said he had Qasim in a lock pressed against the headrest with one hand around his neck and the other holding the knife against his neck.

Adhuham said that the knife cut his neck when Qasim panicked and struggled to free himself.

“The knife cut [him] as I was holding it against him when he began struggling. The went in very deep, piercing from one side to the other,” he said.

Adhuham said that he suffered a shock when the knife went in, and immediately removed the knife and stood frozen looking blankly at the knife and his hand.

He said that he ran away from near the halfway house, and that the knife “fell” into a hole dug up to lay the foundation at a construction site as he ran. He said that he washed his face and hands from a puddle and that he accidently swallowed water from the puddle which had turned red with Qasim’s blood because he had been in a state of shock.

Adhuham said he took off his shirt, and was walking bare-chested when he ran into a friend near Hulhumale’ Flat No. 5. He said that his friend asked him why he was shirtless, and he told him he had been mugged by a migrant. He said that he borrowed a clean shirt from his friend and boarded a bus to Male’, after hiding his bloodied shirt among sacks of gravel.

He said he went to a house where a group of his friends resided in, and was asked by one of them if he had anything to do with the murder of the taxi driver that night.

Adhuham said he did not confess to killing Qasim when asked. He said that he did not attempt to flee after he went home, and was cooperative when the police came to arrest him.

Adhuham was asked by the judge why he previously denied the charge and claimed he was being tortured by the police. He said that he made the claim at the instruction of some of his cellmates, and that he was deceived and manipulated into making the false claim.

The State had read Adhuham’s statement to the police during a hearing in February, back when the plea deal had been in effect. According to the statement, he went in search of targets to rob to collect money to pay his rent, and stabbed Qasim in order to silence him when he began screaming for help.

Following Adhuham’s confession on Thursday, the judge asked questions such as the time of the murder and the length of the knife, to confirm the information on the charge sheet submitted by the State

The State said the act of crime and intent needs to be proven in order to prove the charge, and that though Adhuham confessed that Qasim died by his hands, he denies intent.

The State asked for the opportunity to submit witnesses to support he carried out the act to which he confessed and to prove intent, which was granted by the judge.

The court will therefore hear testimony from the witnesses during the next hearing.

The court also conducted a review of Adhuham’s detainment on Thursday, under the third amendment to Criminal Procedure Code which requires for the detainment of suspects jailed pending the outcome of their trial to be reviewed every 30 days.

The State asked for the court to uphold the previous detainment order, while Adhuham asked for an ease in his detainment arguing he was being cooperative.

However, the judge decided to uphold the detainment order, finding there to be no grounds to warrant his release.