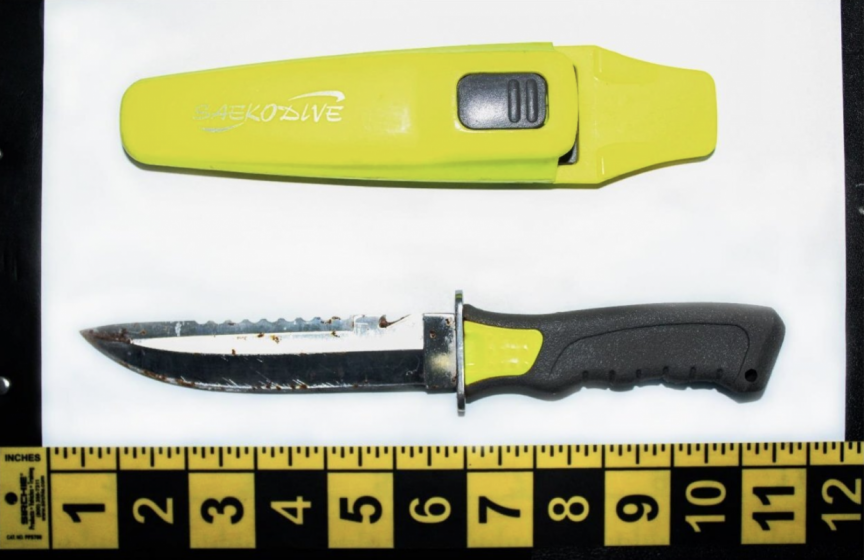 Disappearances and Deaths Commission (DDCom) has posted a reward of MVR 500,000 for anyone who comes forward with information related to the knife in the picture related to the case of missing journalist Ahmed Rilwan Abdulla. (Photo/DDCOM)

Disappearances and Deaths Commission (DDCom) said on Tuesday the commission has sent a knife believe to have been used in the 2014 abduction and murder of journalist Ahmed Rilwan Abdulla overseas for forensic analysis.

DDCom posted a MVR 500,000 cash reward for information related to the knife on Monday. According to DDCom, the knife in question was found on the road outside Rilwan’s apartment in suburban Hulhumale’ on August 8, 2014. The knife is believed to have been used to force Rilwan into a car.

In a press conference on Tuesday afternoon, DDCom member Misbah Abbas said the knife is a key piece of evidence in the commission’s investigation, but declined to disclose details.

“The commission is referring to the police investigation and has sent the knife overseas to conduct the forensic analysis possible at this point,” he said.

Misbah said the commission believes there are people among the general public privy to what happened when Rilwan was forced into the car.

“We ask that these parties share this information with the commission without hesitation,” he said.

Misbah provided assurance the commission with protect the identities of informants who come forward with the information and ensure their safety.

The press conference on Tuesday is the first by DDCom in over a year, but provided little new information.